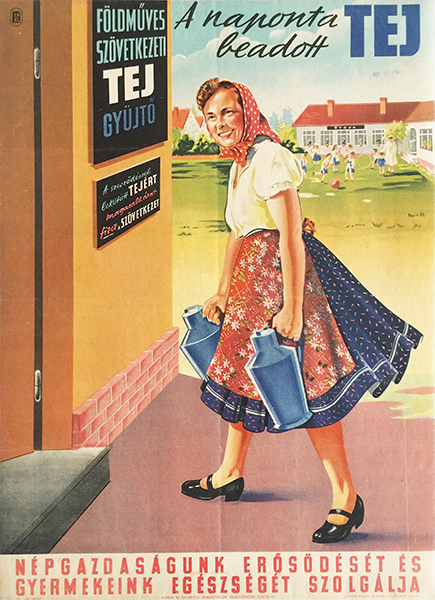 Socialist-realist propaganda poster saysing that the daily compulsory delivery of milk serves the strengthening of our national economy and our children's health.

If one is not aware of the deceiving power of the socialist-realist propaganda posters then he would think that people lived happily in Hungary during the socialist regime, thanks to the prosperous new economic system. This is due to the obligatory socialist-realist style where artist had to picture happy characters, always smiling workers and peasants. This piece is not an exception. the girl is happy to bring the milk produced by her to the agricultural cooperative. According to the text on the wall, the cooperative pays a higher price for the milk. However, this wasn't close to reality. The happy girl is captured in the moment  of handing in the milk. There are kids in the background playing carelessly in the yard of the kindergaden. The whole composition is very idealistic.

Farmers were forced to hand in the goods produced by them to the state, and if they failed to do so, they had to pay an extremely high penalty. Not only the type of goods to be handed in were regulated but the amount to be delivered as well. This made peasants miserable since production is determined by factors many of which cannot be influenced by human will, thus very often they couldn't fulfil the requirements. This is one of the many reasons why farmers went bankrupt. Contrary to the text on the poster, the cooperatives did pay a very low price for the goods. This collectivization was called by the government "the assurance of the sustenance of the people". The text on the bottom of the poster also suggests the same message: serves the strengthening of our national economy and our children's health. However, the collectivization was rather a stockpiling and the manifestation of the socialist idea according to which everything has to be controlled by the state including production and distribution. The scope of the goods to be handed in was widening during the years. It wasn't until 1951 - the year of the creation of this poster - that milk was obliged to be handed in (alongside pork, potato, egg, poultry and wine).