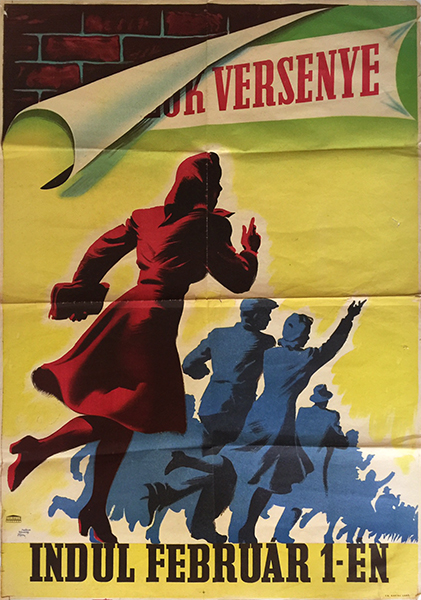 Competition of Brigades - Begins on February 1

The full text on the top is unclear, hence the title is only a suggestion. However, based on the visuals and the historical context of the piece it is most likely that the title is 'Brigadok Versenye' (Competition of Brigades). The socialist brigade worker's competitions were based on the Soviet model. These events weren't simply work competitions but went beyond the sole economic importance. Besides targeting good labour results the members shared the struggle of consciously creating the community of the strong socialist working men. The ideology expressed that a socialist worker had to follow was to live and work according to the socialist manner that required above avarage work results, socialist general and political education, an impeccable private life, active social life, etc.

This poster was designed in socialist realist manner, depicting the crowd of strong workers, holding their arms up as the symbol of the upcoming prosperous future. Men and women are equally present as the communist ideology did not make a distinction between men and women in terms of labour force. The line of workers disappear on the horizon what alludes to the infinite number of members of the  brigades. These socialist realist works are examples of a short period (1949 - 1956) when the government forcibly and explicitly tried to alter all fields of life including art styles, social and private life, economy, etc.