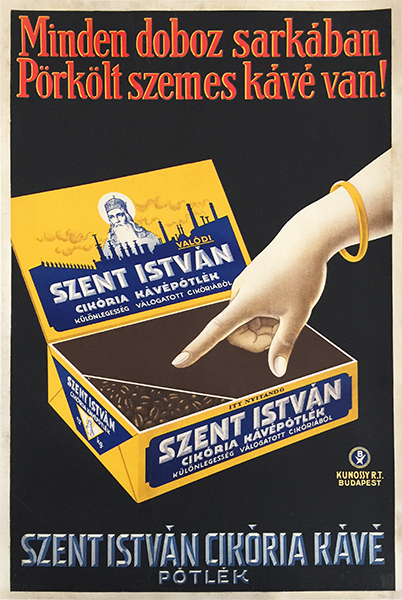 St. Stephen chicory coffee substitute - In the corner of each box, there are real roasted coffee beans

Coffee – one of our ordinary beverages, morning habits, legal addictions. Together with the appearance of the drink, immediately appeared those who loved it. But what could people do in hard times without coffee? This original vintage commercial poster leads us to the answer. It dates back to the 1920s when Hungarian economy was struggling after the losses caused by the World War I. The title says it all: ‘St. Stephen chicory coffee substitute speciality from selected chicory. In the corner of each box, there are real roasted coffee beans!’ It was created by József Bottlik.

As it is usually said, the history of coffee substitute products is as old as the history of coffee. Coffee drinking spread the world between the 15th and the 18th centuries. However, the expensive price, the not easy availability or the absolute lack of the product were the reasons of replacing it during ages. Several raw materials were used for coffee substitutes, such as rye, barley, malt, etc. After a while, the chicory plant was also found to create “fake” coffee from. It is still the most common basic commodity of coffee substitute products nowadays. The chicory-coffee was originated from the 17th century Europe, and it became an everyday need during the Continental Blockade during the Napoleonic Wars. The foreign policy of Napoleon I of France in his struggle against Great Britain meant that a large-scale embargo started against the British trade in 1806 and ended in 1814. As coffee beans were not available from overseas anymore, but coffee-drinking was already a habit in France, a substitute product was needed then.

Chicory coffee was still highly common in the first part of the 20th century in Hungary among other countries. The St. Stephen Chicory Coffee Substitute was a popular product in the interwar period. This poster shows the product in its original contemporary packaging design in front of a simple black background. The box is open, the content is visible, and a gentle female hand with a golden bracelet is pointing at the corner. The packaging design of the box can be seen precisely: the vivid yellow base is together with dark blue panels containing white scripts. In the inner side of the box cover the blue panel is shaped as a silhouette of a city landscape with foaming chimneys, and above appears the portrait of St. Stephen in light blue. He has long hair and beard, he wears the Hungarian Holy Crown and he is looking away gracefully in front of a halo.

The name of St. Stephen can sound familiar for several people. However, while internationally it is mostly used for the first Christian martyr, in Hungary Saint Stephen was the name of the first Hungarian king. He ruled from 1000 or 1001 until his death in 1038. He spread Christianity in the country and also protected the independence of his kingdom from the invading troops of the Holy Roman Emperor. He was canonized in 1083, and his right hand, “The Holy Right” is housed in the St. Stephen Basilica in Budapest.

As St. Stephen is one of the most popular Hungarian saints, he was a good choice to name products after. What is more, the company which produced the coffee substitute was also called Saint Stephen Chicory Company. The reason of the fake coffee’s popularity was mostly the product’s friendly price, but the company also had some good marketing tactics. Giving pearl necklaces to customers may sound weird today, but issuing little pictures, illustrated albums and stickers to collect is familiar for us, too. But while nowadays companies use Disney or other cartoon figures on stickers, the albums of the St. Stephen chicory coffee were about famous Hungarian historical figures.

The St. Stephen chicory coffee was noticeable by not only its historical atmosphere, but by the easily recognizable yellow-blue packaging design, too. It is even more highlighted in this poster by the homogenous black background with the strong contrast of the colours. The background also enhances the flat-like character of the poster, while the angle in which the box is captured emphasizes the perspective. These visual effects contribute to a simple, still playful design. Furthermore, all of them lead to a strong focus on the advertised product which proves the adaption to the tendency of the “Sachplakat”. The style’s greatest advocate was Lucien Bernhardt who made a revolution in German poster art in 1905 with the striking simplicity of his commercial posters. These “object posters” contained a realistic depiction of the product and a clean, bold typography. In Hungary Márton Tuszkay was the first one to introduce the new approach in advertising in the 1910s, but later several other artists followed to create numerous great works with the same style.

This piece is also a fine “object poster”. The composition is concentrated and simplified, the picture and the typography make a perfect combination for a fast catchy commercial. Besides the illustrative representation of the St. Stephen chicory coffee substitute, there is only one more element: the delicate female hand. It doesn’t distract the viewer, but with the pointing gesture it adverts to the most important point, as ‘In the corner of each box, there are real roasted coffee beans!’ It is really interesting to imagine that one time the precious real coffee beans were given in the corner of a coffee substitute product. Today one would rather choose either coffee or a coffee substitute, but wouldn’t mix using both, in accordance with their principles. However, this poster reveals how people survived the times in need: for weekdays the coffee substitute will do, but for weekends or special occasions some real coffee will be enjoyed. Moreover, this advertisement shows the inventiveness of companies which could find special solutions to make their products attractive for consumers even in the times of hardship.

The female hand portrait is interesting from another point of view as well. It’s depicted with soft shapes and smooth shades, and the transitions of colours are gentle. Although the portrayal is figurative, it is decoratively stylized, too. These characteristics evoke the Art Deco style which was one of the leading styles internationally in architecture, fine and applied arts during the interwar period. It was also one of the main tendencies in Hungarian poster art between the mid-1910s and the 1940s, inspiring artists like József Bottlik, Tibor Réz-Diamant or Ernő József Deutsch.

This piece was also created by József Bottlik. He was one of the most important Hungarian Art Deco poster artists. Although he first followed the popular Art Nouveau style, and though he was also influenced by even Expressionism and Modernism, his artistic activity reached its peak with his Art Deco designs. He used compact forms, decorative ornaments and interesting lighting effects. This female hand portrait also reveals the typical light, attractive Art Deco character which Bottlik could accomplish on his posters.

Knowing that Bottlik had an artistic activity with varied influences, it is no surprise that this commercial poster also incorporated several artistic tendencies of the era. The result was a direct and effective, arresting and spectacular poster, while today this fine artwork can engage us with its mere charm and its bittersweet humorous atmosphere.