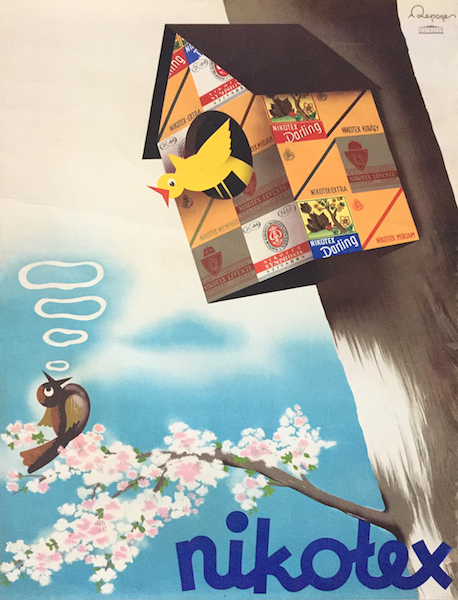 Beautiful poster for Nikotex, the tobacco brand, from the 1930s.

It happened in the 1930s when big companies started to compete with each other and as a result, carefully designed marketing plans appeared on the market. These campaigns gave birth to numerous beautiful posters. The tobacco companies were also coming up with spectacular advertisments since in those times it was allowed to promote tobacco without any legal or ethical restrictions. The main tobacco companies of the time were Modiano, Senator and Nikotex, and the most prominent artists were commissioned to design posters for them, for example Sándor Bortnyik, Róbert Berény or Gyula Macskássy. Modiano was famous for its beautiful modernist and later art deco posters and it wasn't easy for Nikotex creating something different but equally decorative and easy to identify with the brand. Finally Nikotex managed to come up with grandiose designs.

Nikotex used other means besides advertisments to differentiate itself from the competition: in the 1930s they reduced the nicotone in their products. Many posters chose this asset to focus on in the advertisments. At the time Nikotex was considered the less harmful but more expensive brand available on the tobacco market. Interestingly, it is not a contemporary attitude to deal with the concerns related to smoking. Hungary has been producing cigarettes since 1865 and attempts had been made by the turn of the century to produce less harmful cigarettes. However, filtered cigaretts weren't made until 1962 in Hungary. Nikotex was established in 1930 with the goal of finding a solution to subtract nicotone from the cigarettes. After years of researching they did manage to produce less harmful cigarettes but not by filtering the smoke but by reducing the nicotone in the tobacco. Soon many tobacco production companies started to produce classic and Nikotex version. This was when the classification of tobacco products that are still in use today was created, namely when one brand offers more types of one product, such as, strong, medium or light. Moreover, cigarette brands started to use the colours we use today for marking the strength of their products (red for the stronger, blue for the lighter). In those times tobacco related advertisments were very common, and not only posters were used for this purpose but advertising slips as well. Nikotex has remained very popular until the end of the 1950s which can mainly be accounted to the fact that it wasn't much more expensive then general cigarettes and - according to the attitude of the time - it was less harmful.

The central message of Nikotex posters were typically health related and praising the love of nature which is controversial from today's perspective, but this is what makes these posters real historical documents. This particular piece by János Repcze is a very decorative composition with art deco elements. There are two birds singing and the captured moment takes place on a sunny spring day. The bird sitting on the branch is making smoke rings and it  seems  like he is telling to the other bird in the bird house that Nikotex is very healthy. The bird house is decorated with the packaging of the products offered by the company. This and the smoke rings are the only elements of the poster which allude to tobacco whereas the larger part of the composition is a beautiful image of the waking of nature in spring.