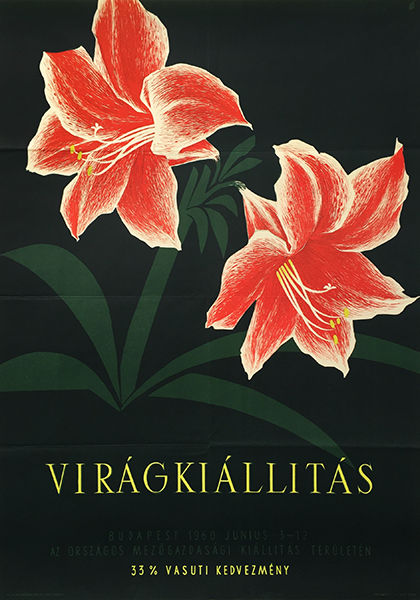 Poster for a flower exhibition in 1960, Budapest, within the frames of the National Agricultural Exhibition.

The very first Hungarian agricultural exhibition’s idea originated in the 1827 Viennese crop exhibition. The first Hungarian version took place in 1851, then became a regular event. It wasn’t until 1958 that subjects related to gardening, such as viticulture or flowers, were incorporated in the Agricultural Exhibition. Regardless of the political era, the all-time goal of these exhibitions - besides providing the possibility for the agricultural workers to learn information about the current issues related to the industry - was to bring agriculture closer to the laymen and propagate the country’s successes on the field.

The strong propaganda force of these events received even stronger emphasis in the Socialist times when the centralized economy regarded these large-scale nationwide happenings as means for spreading their political concepts on the field of economy. The exhibitions also became testimonies of ‘proper agricultural politics’ as it always showed increasing tendencies in for example modern technologies, production, etc. In reality the information showcased most of the time weren’t true, but despite of the clear signs of an upcoming crisis, the regime was eager to prove that the socialist economic politics were fruitful.

In order to make the propaganda effective they had to generate a multitudinous attendance. To bring crowds from the villages the train companies offered 33% discount, that is indicated on the poster with bright yellow letters. To attract even more people, programs that were more interesting to the general public were added, such as a hunting exhibition or the flower exhibition. The Agricultural Exhibition in 1960 also showcased a special selection of modern technical equipment from the 1st of June, and according to a newspaper article from the time, “it only closed on the 5th, so the audience of the flower exhibition opening on the 3rd will have chance to see it as well’. The article was referring to the exhibition advertised by this poster. Newspapers and posters were responsible for promoting the event.

This poster attracted attention with its clear elegance and strong contrasts on many levels. The dark black background is in sharp contrast with the bright yellow letters as well as with the red flowers. More exciting is the contrast between the detailed red flowers drawn with delicate precision and the completely schematized stalk made with paper cut-out technique. The design is a perfect example of the wide variety of techniques and styles that were used in the 1960s, and were often incorporated in one image. The flower depicted here is a red lily and it pops out from the black background whereas the stem almost disappears, becomes subsidiary. The text ‘virágkiállítás’ (flower exhibition) and the information about the railway discount written with the same bright yellow as the stamen of the flower are the concrete and at the same time refined elements of the poster. If it wasn’t for the stalk, the flowers would appear to be floating in endless space alongside the yellow text - and this is what one sees when looking at the poster from a distance. However, the stylized stem appears when looking from closer and seems to be the means for gently holding the flowers back from flying away. This feeling is not only created by the contrast between the colours, but by the striking difference between the geometric and stylized earth-bound stem and the ethereal flowers.