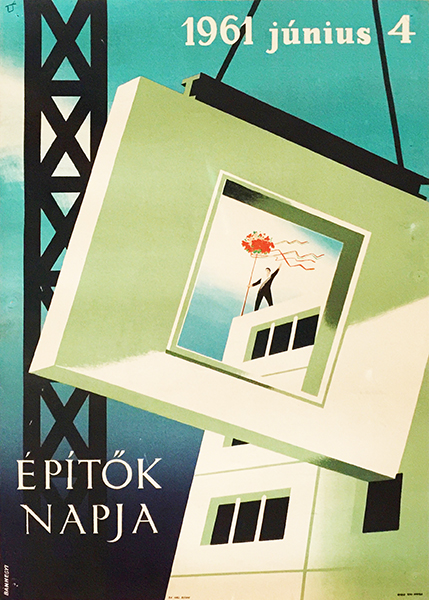 Builders' Day was a socialist event organized in every year, on the first Sunday of June.

Bánhidi’s poster reaches back to the traditions of the short but very artistic poster art of the post Second World War era. The theme could be easily associated with the end of the 1940s thus the author applied the delicate style of the time.

After the war, the population was devastated by the fact that Budapest suffered severe damages in the bombings. Numerous posters were printed that were emphasizing the efforts and achievements of the rebuilding plans and that Budapest was on its way to become a metropolis. In the socialist times, starting in 1949 there was a massive propaganda highlighting the new government’s successes in rebuilding the city. At the same time the new system was trying to establish its support from labourers, hence the builders' day was meant to be an important and symbolic holiday.

This poster applies the axonometric perspective and strictly constructed, geometric composition with delicate shades that was the characteristic of the posters promoting the rebuilding of the country in the late 1940s. However, on this one, it is not the city that is depicted, but a block of flats that was typically the housing type of the communist era. It perfectly matched their ideology: they were cheap, could be built up relatively rapidly and had the capacity to accommodate a large number of people. The large panel system was introduced in Hungary in the early 1960s and was based on the Soviet model. The very first, experimental block building was presented in Dunaújváros, an industrial city established by the socialist government in 1961. These buildings were supposed to provide solution for the housing crisis deriving from the urbanization in the 1950s. In the year of this poster the prototype of the panel house was born, therefore it was an evident subject for the poster to propagate the builder’s day with the depiction of a block building.

The image is captured from a lower angle thus making the building and the man on the top even more victorious. The softly indicated shades give elegance to the composition. The worker on the top is stylized, he seems to hold a maypole in his hand that has the Hungarian tricolor’s colours, red, white and green. The Maypole is related to the celebrations at the beginning of spring, however it is also a symbol of rebirth, thus it makes sense on this poster as well. The image of the victorious worker is framed by the panel being lifted by the crane, making him the most important element of the composition, even though he is very small compared to the other parts of the poster. Yet, he becomes the representation of the triumphant socialist plans that resulted in providing people accommodation.

All propaganda in the socialist times were focusing on the (often non-existing) achievements of the government with exaggerated monumental compositions, and completely ignored the wrongdoings of the forced industrialization and other incapable actions of the system living under the aegis of the Soviet Union. However, this does not deprive these works from their artistic values. On the contrary, beside being pieces of art, they also become exciting, unique and rare historical documents.