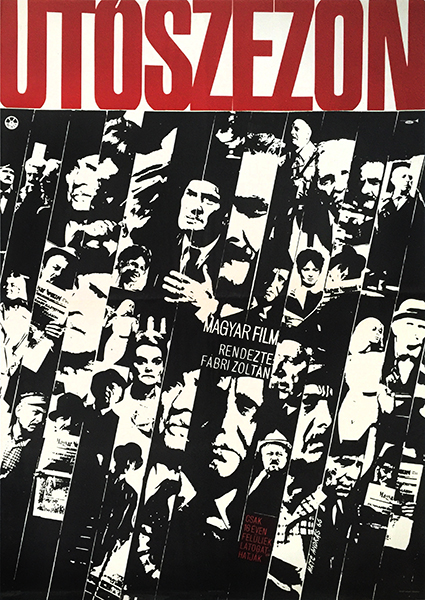 Poster for the film of one of the most acclaimed Hungarian directors, Zoltán Fábri. The film starred Antal Páger, a legendary actor.

The film was made in the golden age of Hungarian cinema and the reception was very diverse; not in terms of art but in terms of politics. The film is set in 1961, a year after Adolf Eichman, the nazi war criminal was captured in Buenos Aires. This news received huge international attention, everyone was talking about it. A small group of friends decided to play a trick on their friend, Kálmán Kerekes, so they call him on the phone, disguise the phonecall an official summon by the Police. The seemingly innocent joke turns out to be serious, as Kerekes has a guilty conscience. In 1944 a nazi officer asked him if there were any Jews left in the town and he replied 'Well, unless the Szilágyi family...". The next day, the Szilágyi family was taken to the ghetto and then to concentration camp.

After the phone call, Kerekes goes to the town where he 'committed his crime'. In the meantime his friends are looking for him, spreading photos of him, asking around if anyone met him. When Kerekes sees these pictures of himself, he starts getting paranoid. At the end of the day his friends find him, Kerekes figures out that they were just teasing him, however, in order to ease his guilt, he confesses to his friend. As a result they instantly transform into a jury to decide wether he is guilty or not. His friends cannot decide so the next day he goes to the police and pleads guilty, but no one cares. Then he decides to commit suicide. He lies down on the railway, but the train manages to pass by without hurting him. At the end he stays alone with his guilt that he cannot get rid of.

The film was nominated on the Venice film festival to the Golden Lion prize and won the San Giorgio Prize.

The film is a very important piece especially in the poitical context it was made in. In Hungary during socialism it wasn't approved to talk about the Holocaust, especially as the collective sinful past of the nation. Also, the cultural politics wasn't fond of the fact that there was no real communist character in the movie, a heroic simple worker. On the contrary: Fábri portrayed the drama of a single, fallible man who decided to undertake the kept back guilt of a whole nation. Another interesting choice of the director was that Antal Páger who played the main role was considered by many a war criminal, as he was associated with extreme rightist propaganda prior to World War II. He emigrated to Buenos Aires to avoid getting improsoned, but then he agreed with the Hungarian government and returned to Hungary. However, in the eyes of many, he remained guilty.

The poster was designed by András Máté who often did composition built up of stripes. On this black and white poster of his, he arranged the stripes diagonally. The rhythm of the design is achieved by the densely placed burnt photographs, mostly close ups of faces. This gives a darker atmosphere that refers to the restless, unburied past. The title on the top is written in red what makes the piece even more serious.