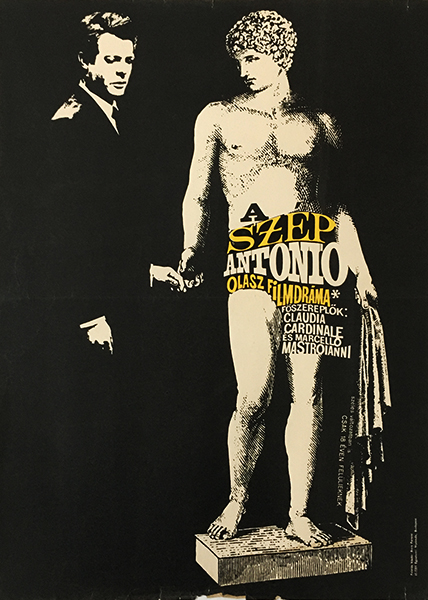 Decorative composition mixing the technique of burnt photography with drawing.

Il bell'Antonio is a 1960 Italian-French drama film directed by Mauro Bolognini. The film is a based on a novel by Vitaliano Brancati and adapted for the screen by Pier Paolo Pasolini and Gino Visentini. It stars Marcello Mastroianni, Claudia Cardinale and Tomas Milian. The film won the Golden Leopard at the Locarno International Film Festival.

In the town of Catania, Italy, women adore the handsome Romeo, Antonio (Marcello Mastroianni), who is a great success with romance. Women think of him as the perfect lover. In reality, his life is plagued by problems, and soon, after getting married he's the laughing stock of the town because of his alleged impotence.(source: wikipedia.org)

The elegant black and white poster for the Hungarian release of the movie is capturing the tension when the reality does not meet the expectation. Antonio, pictured with burned photgraphy is holding the hand of a greek sculpture, the symbol of the ideal ideal man. Antonio is just a shadow stepping out from the black background, the same way he steps out from the shadow of the idealized image of himself when getting married.