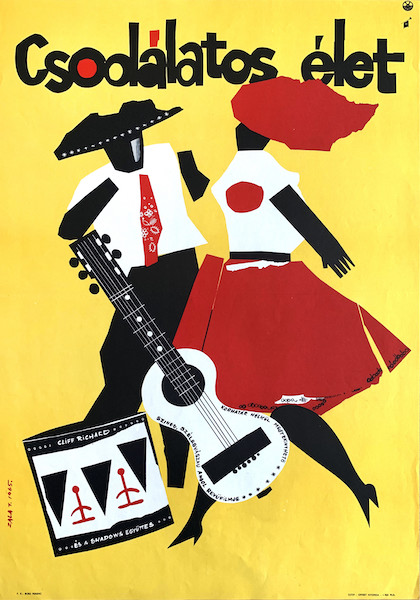 Wonderful Life (released in the U.S. in 1965 as "Swingers' Paradise") is a 1965 vintage Hungarian movie poster designed by Tibor Zala.

Wonderful Life (US: Swingers' Paradise) is a 1964 British film made as a vehicle for pop star Cliff Richard and is the third in a series of film musicals that included The Young Ones and Summer Holiday. Written by Peter Myers and Ronald Cass, directed by Sidney J. Furie, choreographed by Gillian Lynne, it also stars Susan Hampshire, Una Stubbs, Melvyn Hayes, Richard O'Sullivan, Gerald Harper and The Shadows. The movie was filmed in Las Palmas de Gran Canaria city in Spain, and the "desert" scenes shot on Maspalomas sand dunes on Gran Canaria island, Canary Islands. (source: wikipedia.org)