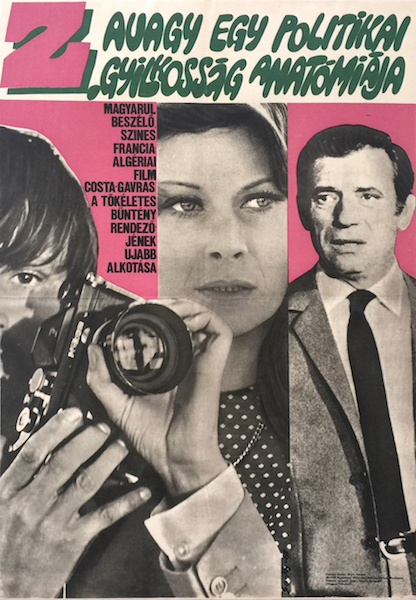 Z - Anatomy of a Political Murder

Z is a 1969 Algerian-French epic political thriller film directed by Costa-Gavras, with a screenplay by Gavras and Jorge Semprún, based on the 1966 novel of the same name by Vassilis Vassilikos. The film presents a thinly fictionalized account of the events surrounding the assassination of democratic Greek politician Grigoris Lambrakis in 1963. With its satirical view of Greek politics, its dark sense of humor, and its downbeat ending, the film captures the outrage about the military dictatorship that ruled Greece at the time of its making.

The film stars Jean-Louis Trintignant as the investigating magistrate (an analogue of Christos Sartzetakis who later served as president of Greece from 1985 to 1990). International stars Yves Montand and Irene Papas also appear, but despite their star billing have very little screen time. Jacques Perrin, who co-produced, plays a key role as a photojournalist. The film's title refers to a popular Greek protest slogan (Greek: Ζῇ, IPA: [ˈzi]) meaning "he lives," in reference to Lambrakis.

The film had a total of 3,952,913 admissions in France and was the 4th highest grossing film of the year. It was also the 12th highest grossing film of 1969 in the U.S. Z is also the first film—and one of the few—to be nominated for both the Academy Awards for Best Picture and Best Foreign Language Film. It won the latter, as well as the Jury Prize at the Cannes Film Festival, the BAFTA Award for Best Film Music, and the Golden Globe Award for Best Foreign-Language Foreign Film; at the 27th Golden Globe Awards, the producers of Z refused the award to protest against the film's exclusion from the Best Motion Picture - Drama category. (source: wikipedia.org)