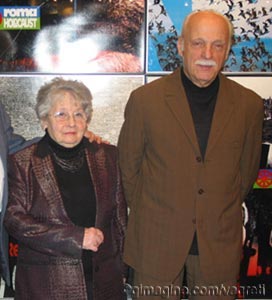 An artist couple who have been working together since the beginning of the 1950’s, they were highly effective and convinced propagandists for the socialist system. In addition to political posters, they worked in every field of visual communication. Éva Kemény studied at the University of Applied Art between 1941 and 1949; her masters were Béla Molnár and Pál Mihátz. László Sós was student of the Aterlier Studio and workshop school in 1942; he studied under Dezső Orbán and István Irsai. The couple has been collaborating on posters since the 1950’s. Beyond their commercial posters, they also became deeply involved in politics. They were soon became acknowledged by the state and were awarded prizes and important positions in artists’ communities. After the political transformation of 1989, they continued to work for political causes, including the leftist party MSZP and for environmental initiatives.

So-Ky preferred to use symbols like the red star, and the Soviet and Hungarian flag. They have often worked for the new national festivals: anniversaries, like that of the “Liberation” or of the October revolution. On these posters they employ numbers as visual elements. Some of their works propagate the slogan “war for peace,” a typical mantra of the Cold War period. On these designs, the United States often appears as the evil enemy. We can say that So-Ky created a new understandable visual language for political propaganda that dominated this field until the 1980’s. They were very productive, and received many commissions. They designed propaganda, commercial and movie posters as well. They designed the poster for the classic movie Some Like it Hot. Their soc-modern-influenced style is mixed with other tendencies, like op art on their commercial designs. So-Ky received several orders from the biggest companies: shopping centers, shoe fabrics, rubber factories, and many others. They preferred to construct compositions using the contrasting effect of black-and-white, or to use dominant, contrasting colors over large areas. Their constructivism-inspired style was suitable for modern emblems as well as for the logos of companies as (like that of industrial fairs or of Comecon).                                                         .