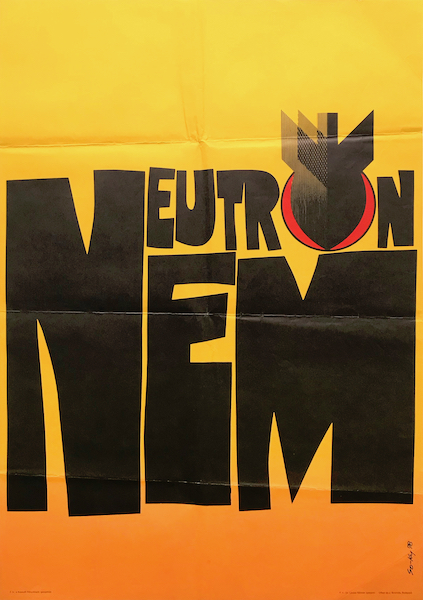 Neutron No is a 1978 vintage Hungarian propaganda poster protesting the development of neutron bombs designed by So-Ky.

This propaganda poster protests against the neutron bombs, which were developed partly to stop a massive Warsaw Pact invasion against West Germany and Western Europe in general. According to proponents, neutron bombs would blunt an invasion by Soviet tanks and armored vehicles without causing as much damage or civilian deaths as the older nuclear weapons would.

There was a firestorm of protest as the growing anti-nuclear movement gained strength through this period. Communist countries took a their part in this by launching propaganda campaigns against the neutron bomb. Artists were commissioned to design posters opposing the manufacturing and stockpiling of these weapons.

Opposition was so intense that European leaders refused to accept it on their territory. President Ronald Reagan bowed to pressure and the built examples of the W70-3 remained stockpiled in the US until they were retired in 1992.