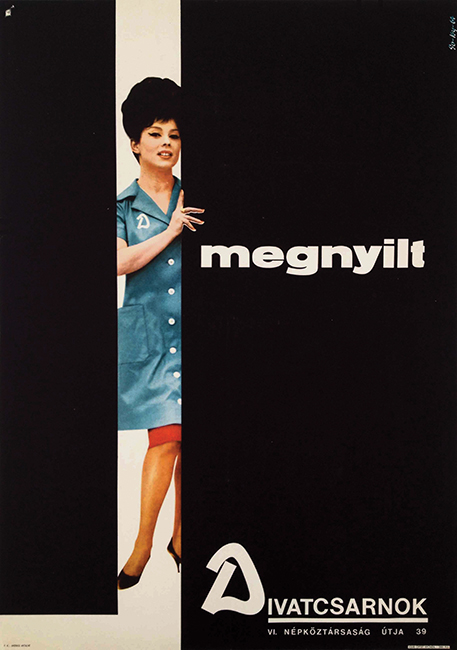 The Fashion Hall is Open

This is a well known, extremely innovative design by So-Ky, which also incorporates humor and playfulness, it has been reproduced many times since. The design is based on an simple creative idea, that the opening of the new store (or re-opening in this case) means in its essence, that a door is opened.

The attractive saleswoman does the job, opening a door which leads us towards light, and an unknown world full of amazing products. To achieve a very bold effect, the artist couple used a composition compressed to the extreme.

The photomontage technique places the saleswoman in a white strip, which symbolizes the department store, while the rest of the omposition is occupied by a large black field. This is the area where the typography is placed, and it also focuses our attention to the woman who, while opening the door, is inviting us in at the same time with this gesture. The door of course, is just an illusion, and So-ky uses our minds to convey that element from a very basic matrix of black and white.

The predecessor of the Parizsi Nagyaruhaz (formerly known as the Fashion Hall) was built in 1882 by the Terezvarosi Casino, Gusztav Petschacher. The building is located on the southern side of Andrassy Avenue in Budapest, under number 39. On the other side of the building it has a frontage at Paulay Ede Street 54. The façade facing Andrássy Avenue is built in an Art Nouveau style, while the side overlooking Paulay Ede Street shows the characteristics of Neo-Renaissance.

Its first transformation began in 1909 after Samuel Goldberger bought the building to open a French style modern department store. Zsigmond Sziklai was commissioned to re-design.

The new building was opened to the general public on March 3, 1911. It was the first modern departmenr store in the country, one of the most beautiful buildings in the capital's most beautiful avenue. Fortunately, in the war, the building was not damaged, but after communist nationalization it was not used for its original purpose but as a bookshop.

It was reopened in 1958, and was renamed Fashion Hall.