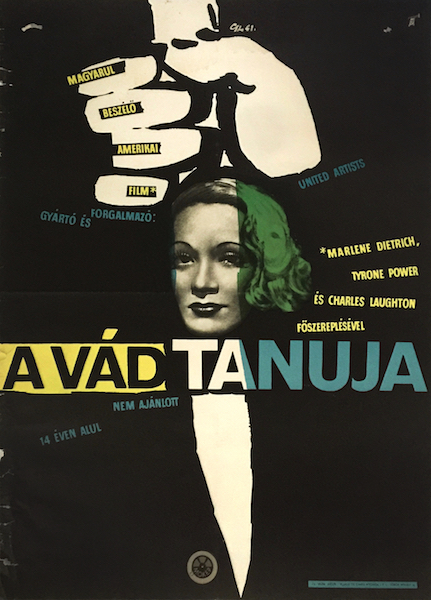 Witness for the Prosecution

Very good, fold marks, two holes at each to corner, tears and paper loss along the left border.

Witness for the Prosecution is a 1962 Hungarian vintage first release movie poster designed by Lajos Gorog.

Witness for the Prosecution is a 1957 American courtroom drama film with film noir elements. It was co-adapted and directed by Billy Wilder and starred Tyrone Power (in his final screen role), Marlene Dietrich, and Charles Laughton, with Elsa Lanchester in a supporting role. Set in the Old Bailey in London, the picture is based on the play of the same name by Agatha Christie and deals with the trial of a man accused of murder. This was the first film adaptation of Christie's story, and was adapted for the screen by Larry Marcus, Harry Kurnitz and Wilder. (source: wikipedia.org)