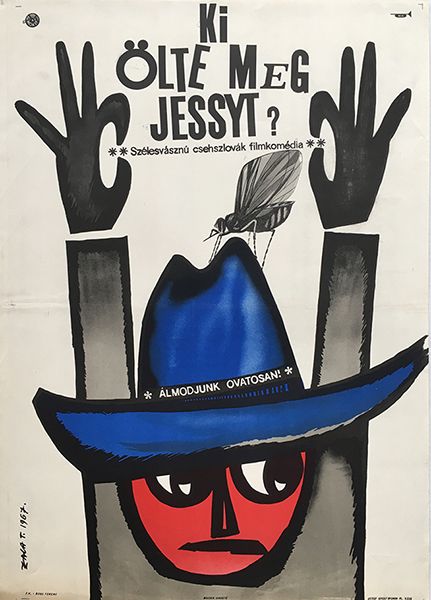 Who Wants to Kill Jessie?

Who Wants to Kill Jessie? is a 1967 vintage Hungarian movie poster designed by Tibor Zala.

Who Wants to Kill Jessie? (Czech: Kdo chce zabít Jessii?) is a 1966 Czechoslovak science fiction comedy film directed by Václav Vorlíček. "What if someone had an absurd dream and the visions ran out in the street?" a scientist asks Rose, a researcher who discovers a way to engender beneficial dreams (to produce contented, productive workers). There's a problem: after an injection of her elixir, dream elements become real. Rose learns this after dosing her husband Henry to stop his dreaming about Jessie, a curvaceous comic-book heroine who has anti-gravitational gloves he needs to study so he can solve a problem at the factory where he's chief engineer: Henry wakes up with Jessie asleep next to him pursued by a cowboy and a super hero. Jealousy consumes Rose. All this plus satire aimed at the Czechoslovak state. (source: imdb.com)