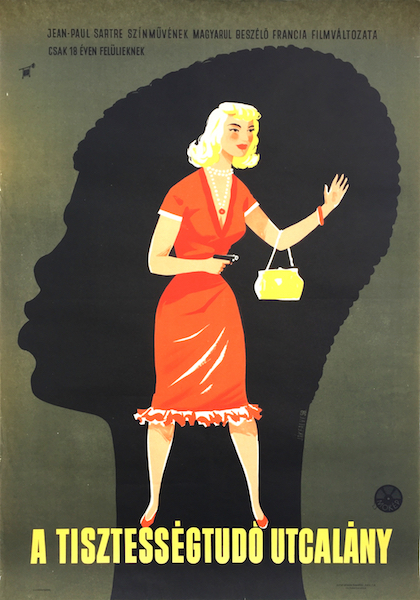 The Respectful Whore is a 1958 vintage Hungarian movie poster designed by Tibor Jakfalvy.

The Respectful Prostitute (French: La Putain respectueuse) is a French play by Jean-Paul Sartre, written in 1946, which observes a woman, a prostitute, caught up in a racially tense period of American history.

The audience understands that there has been an incident on a train with said woman involved, but also a black man on whom the blame is laid by the prejudiced law enforcers. What comes to the viewer's realisation is that a white man instigated an attack, but it is in the interests of the law to preserve the perception of the white person at the expense of the black "devil". The tale takes a brief look at the loss of freedom inside a cruel world, a subject that dominates Sartre's literary career.

The play premiered in November 1946 at the Théâtre Antoine-Simone Berriau in Paris. When the play was produced in the United States, Sartre was accused of anti-Americanism. Sartre's play is believed to have been based on the infamous Scottsboro case, in which two white prostitutes accused nine black teenagers of rape on a train traveling through Alabama in 1931. The play was adapted in the film La Putain respectueuse (1952).