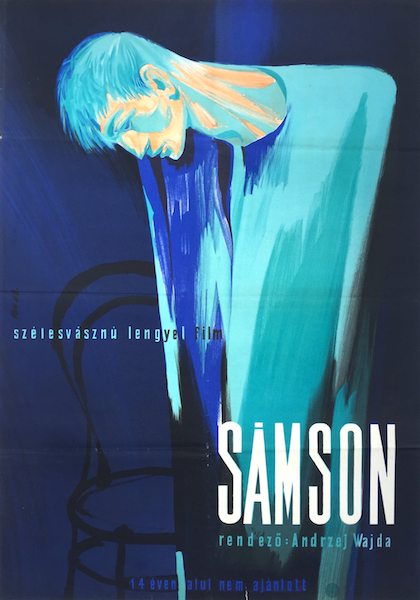 Samson is a 1961 Polish film directed by Andrzej Wajda that uses art house aesthetics to tell a story about the Holocaust. Wajda's World War II film alludes to the Old Testament story of Samson, who had supernatural physical strength. But unlike the Biblical character, Wajda's Samson has great emotional strength.

A dark coming-of-age film, Samson follows its Jewish protagonist (Serge Merlin) from an anti-Semitic private school to a prison, then into a Jewish ghetto, and finally over the ghetto wall to the outside world. Wajda uses this journey as a means to explore expressionist cinematography and the weighty issues facing the Jewish people.

The construction of the Jewish ghetto is communicated through a single, stationary shot. A shabbily dressed mass is clustered in front of the camera, and a pair of hands with a hammer and nails secures one board at a time, until the shot of people has been replaced with a shot of a wall. Through minimalism and simplicity, Wadja establishes a separation between the world of the impoverished Jew and the world outside the ghetto. The viewer looking on as the ghetto walls block the view of what happening inside, is made to feel detached from the horror inside.

One question Wajda raises is that of Jewish solidarity and the guilt of being saved while one's brethren are suffering. Samson escapes from the Jewish ghetto but immediately wants to return. Although he could enjoy a comfortable life of cocktails and women, he'd rather be in the ghetto, collecting corpses off the streets. Samson argues that his place is with the Jews, that he should suffer alongside them. A fake-blond beauty offers a different take. She confides to Samson that she's Jewish and has been concealing her roots in order to avoid the ghetto. Although she argues passionately, Samson's emotional strength inevitably inspires her to accept her fate as a Jew.

When Samson is bruised and exhausted, lying on the ground, he is encouraged by a close friend who says, "one man can suffer such blows and rise again." For Wajda, this is the greatness displayed in Jewish history. Samson is a scrawny, haggard young man, who says very little and might almost border on boringly average; but he has the ability to rise again despite any blow, proving his strength of spirit. (source: wikipedia.org)