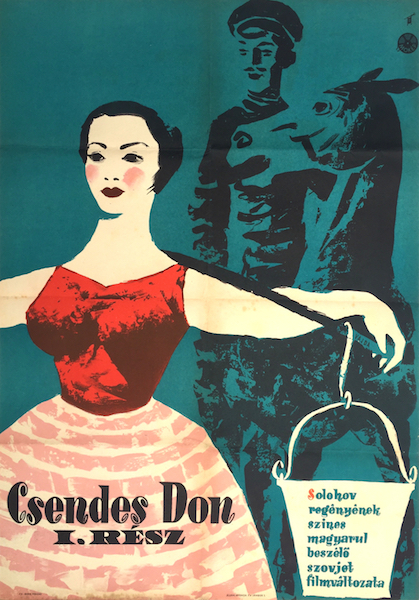 And Quiet Flows the Don (Russian: Тихий Дон, translit. Tikhiy Don) is a three-part epic 1958 Soviet film directed by Sergei Gerasimov based on the novel of the same title by Mikhail Sholokhov. The first two parts of the film were released in October 1957 and the final third part in 1958. In 1958 the film won Crystal Globe award at the Karlovy Vary International Film Festival and the Best Picture Award at the All-Union Film Festival.

And Quiet Flows the Don or Quietly Flows the Don (Russian: Тихий Дон, literally "Quiet Don") is an epic novel in four volumes by Russian writer Mikhail Alexandrovich Sholokhov. The first three volumes were written from 1925 to 1932 and published in the Soviet magazine Oktyabr in 1928–1932, and the fourth volume was finished in 1940. The English translation of the first three volumes appeared under this title in 1934.

The novel is considered one of the most significant works of world and Russian literature in the 20th century. It depicts the lives and struggles of Don Cossacks during the First World War, the Russian Revolution, and Russian Civil War. In 1965, Sholokhov was awarded the Nobel Prize for Literature for this novel. The authorship of the novel is contested by some literary critics and historians, who believe that it mostly was not written by Sholokhov. (source: wikipedia.org)