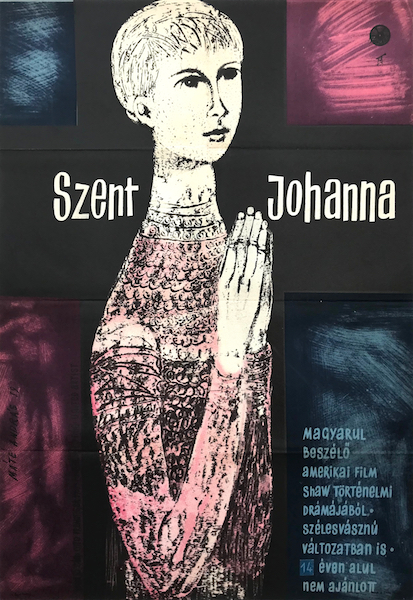 Saint Joan is a 1960 vintage Hungarian movie poster designed by Andras Mate in 1959.

Saint Joan (also called Bernard Shaw's Saint Joan) is a 1957 historical drama film adapted from the George Bernard Shaw play of the same title about the life of Joan of Arc. The restructured screenplay by Graham Greene, directed by Otto Preminger, begins with the play's last scene, which then becomes the springboard for a long flashback, from which the main story is told. At the end of the flashback, the film then returns to the play's final scene, which then continues through to the end.

This was the film debut of actress Jean Seberg, who won a talent search conducted by Preminger that reportedly tested more than 18,000 young women for the role. (source: wikipedia.org)