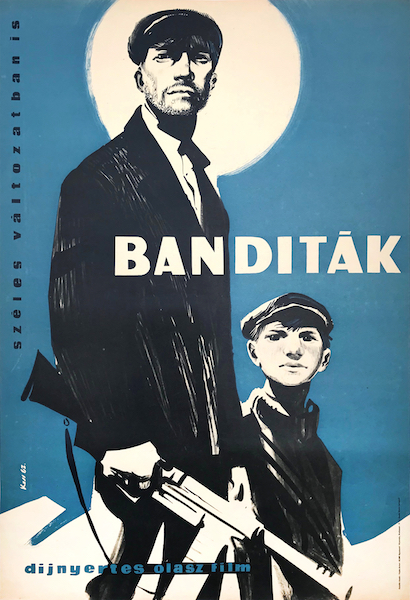 Bandits of Orgosolo is a 1962 vintage Hungarian movie poster designed by Janos Kass for a 1961 Italian film.

In the harsh granite mountains of the center of the island of Sardinia in the Mediterranean Sea, an old people live at the town of Orgòsolo. Between the rocks and the oak woods, shepherds attend their flock of sheep like their fore fathers did since prehistoric times. So do Michele and his younger brother Peppeddu that own a few sheep and make a harsh but honest living selling pecorino cheese. One day arrive three bandits on the run with machine guns and stolen pigs that take a rest at Michele's camp site. When the police arrives a day later, they run and kill a policemen in flight. Michele takes his sheep and escapes in the opposite direction and becomes a fugitive. Hunted by the police, while afraid to stand trial and leave his sheep poorly protected by his young brother, Michele decides to take Peppeddu and his flock over the mountains. Half way his sheep die of exhaustion and thirst, leaving the brothers without living so that nothing remains but returning to Orgòsolo. There they hear that Michele has been condemned for conspiracy to murder and that his creditors threaten to sell their house leaving their mother homeless, since no sheep are left to pay the dept. Nothing remains for Michele but to take up a machine gun and rob some sheep, become a bandit himself and leave a fellow shepherd in peril, thus starting a vendetta and a new cycle of violence.