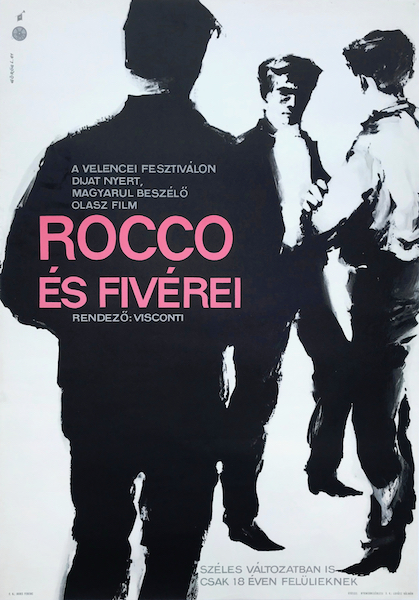 Rocco and His Brothers

Rocco and His Brothers is a 1961 vintage Hungarian movie poster designed by Lajos Gorog.

Rocco and His Brothers, Italian: Rocco e i suoi fratelli, is a 1960 Italian film directed by Luchino Visconti, inspired by an episode from the novel Il ponte della Ghisolfa by Giovanni Testori. Set in Milan, it tells the story of an immigrant family from the South and its disintegration in the society of the industrial North. The title is a combination of Thomas Mann's Joseph and His Brothers and the name of Rocco Scotellaro (it), an Italian poet who described the feelings of the peasants of southern Italy.

The film stars Alain Delon, Renato Salvatori, Annie Girardot, and Claudia Cardinale in one of her early roles before she became internationally known. The score was composed by Nino Rota. (source: wikipedia.org)