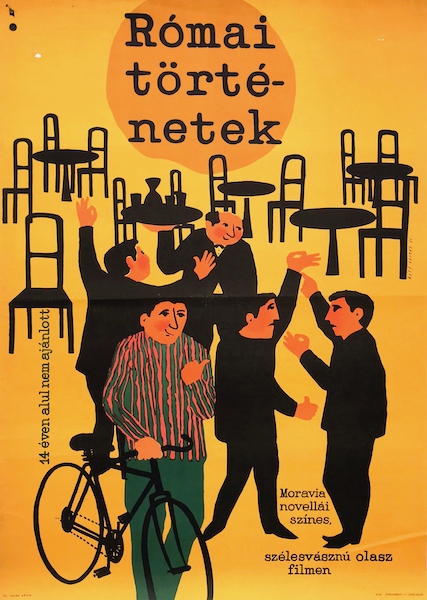 Roman Tales is a 1961 vintage Hungarian movie poster designed by Andras Mate designed in 1961 while the film was released in 1962.

In Rome, during the Fifties, three boys attempt to commit a robbery. They're Mario, Alvaro and Otello, aided by a trickster, Professor Semprini, who claims to be a great intellectual. In reality the man is just the garbage boy of the upright lawyer Mazzoni Baralla, who goes on the trail of the three boys as soon as they attempt the shot. Indeed, Alvaro, Mario and Otello are arrested, after being deceived by Semprini, who demands from them a payment for the design of the plan. In fact the three first attempt to pass off counterfeit notes, then pretend to be guards from the vice squad in Villa Borghese. After the arrest and acquittal, the three decide to return to their old and simple jobs. (source: wikipedia.org)