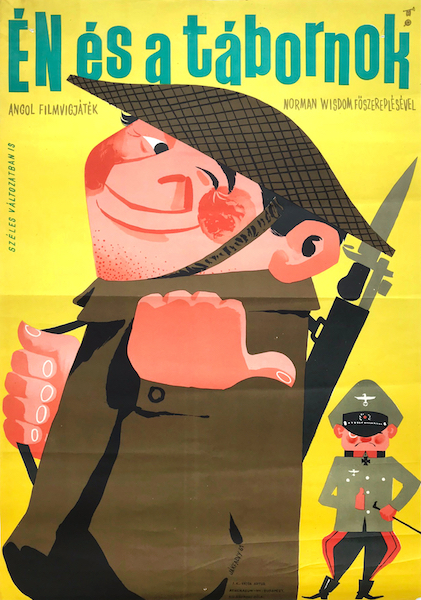 The Square Peg is a 1961 vintage Hungarian movie poster designed by Tibor Jakfalvy.

During the Second World War, Norman Pitkin, a roadmender with the St Godric's Borough Council, enjoys annoying the soldiers of the nearby British Army camp, even a general. Despite the efforts of his boss, Borough Engineer Mr Grimsdale, Colonel Layton (the camp commander) has both of them called up for service in the Pioneer Corps to exact retribution. They begin training at the same camp under the supervision of one of Pitkin's former victims, Sergeant Loder. The only bright spot for Pitkin is falling in love at first sight with the beautiful ATS officer Lesley Cartland, who is preparing to go behind enemy lines in Nazi-occupied France.

Pitkin and Grimsdale board the wrong lorry and end up parachuting into France, where they are put to work on road repairs. They inadvertently advance four miles into enemy territory, and Grimsdale is captured and taken to local headquarters in a chateau. Meanwhile, Pitkin (out of uniform) goes to the nearby town of Fleury to purchase sugar and eggs, but does not notice German soldiers standing to attention and saluting him. It transpires that he is looks exactly like the ruthless local commander, General Otto Schreiber. In a cafe, he recognises the waitress as Lesley Cartland. She is working with the local resistance group, but Pitkin inadvertently blows her cover and she is arrested, along with the cafe owner.

Pitkin and Henri Le Blanc, the local resistance leader, break into the chateau through a tunnel that Pitkin digs to try to rescue them, but Henri is himself captured. Pitkin, unaware of this, climbs into Schreiber's suite. When Gretchen, the general's girlfriend (an opera singer of Wagnerian proportions), arrives, Schreiber leaves strict orders not to be disturbed, no matter what. In the next room, Pitkin dresses in one of Schreiber's uniforms and awaits his chance. He watches through a keyhole as the couple dine, then unexpectedly sing a duet. When Schreiber leaves the room to attend to his throat, Pipkin is mistaken for him by Gretchen and has to attempt to sing Schubert lieder with her. Luckily, Schreiber has locked himself in the bathroom. Eventually he gets out, but after some further hijinks, including a rendition of the Marx Brothers' mirror routine from Duck Soup, Pipkin knocks Schreiber out (Gretchen having fainted after seeing two Schreibers). By pretending to be Schreiber, Pitkin manages to free the prisoners. They escape, but Pitkin is caught and sentenced to be shot at dawn. As the execution is about to be carried out, he inadvertently falls into the camouflaged tunnel he dug and escapes.

After the war ends, Grismdale is still Borough Engineer, but Pitkin is now the mayor. (source: wikipedia.org)