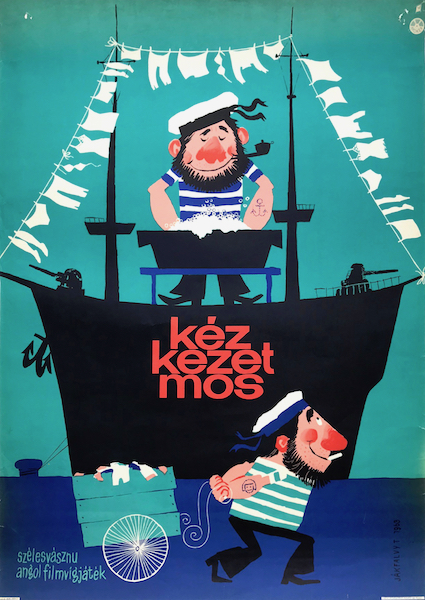 Up the Creek is a 1963 vintage Hungarian movie poster designed by Tibor Jakfalvy.

Lieutenant Humphrey Fairweather, a well-meaning but accident-prone naval officer with a passion for rockets, is posted where he can (so the navy hopes) cause no further damage. He is given command of a mothballed Royal Navy vessel, HMS Berkeley, which has had no commanding officer for several years. She is moored at a wharf on the Suffolk coast near the (fictional) village of Meadows End.

He discovers that the ship is woefully under strength and is forced to contend with the schemes of his bosun, Chief Petty Officer Dogerty (Sellers). He and the crew are running several profitable businesses, including a same-day laundry, selling naval rum and cigarettes to the local pub, the Pig and Whistle, and making pies and pastries for sale to the villagers. They also keep pigs and hens.

After the naive Fairweather is innocently drawn into the enterprises, he is politely blackmailed into covering for them. But when an admiral makes a surprise inspection, the story eventually comes out. Whilst angrily haranguing them, Admiral Foley accidentally launches Fairweather's experimental rocket, and the ship is sunk.

Because of Fairweather's impeccable connections at the Admiralty, and because the Berkeley was Admiral Foley's first command, Fairwather is not court-martialed. Instead, he is promoted to lieutenant-commander and posted to Woomera to continue his rocketry research, accompanied by Susanne, the attractive French girl he met at the pub. The ship's crew are posted to another ship, HMS Incorruptible. (source: wikipedia.org)