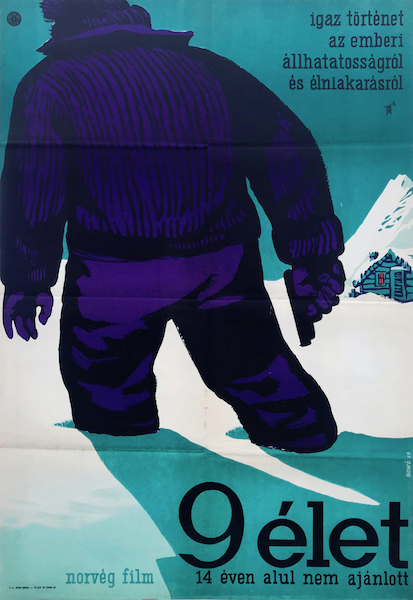 Nine Lives (Norwegian: Ni Liv) is a 1957 Norwegian film about Jan Baalsrud, who was a member of the Norwegian resistance during World War II. In 1943, he participated in an operation to destroy a German air control tower. This mission was compromised when he and his fellow soldiers, seeking a trusted resistance contact, accidentally made contact with a civilian who betrayed them to the Nazis.

The film was directed by Arne Skouen and is based on the book We Die Alone by David Howarth. In 1958 the film was nominated for an Oscar for Best Foreign Language Film and was entered into the Cannes Film Festival.

In 1991 Norwegian television audiences voted it the greatest Norwegian film ever made.

The morning after their blunder, their boat – containing 8 tons of explosives intended to destroy the air control tower – was attacked by a German vessel. The Norwegians destroyed their boat by exploding their payload, and Baalsrud and some other surviving soldiers fled.

They swam ashore in ice cold Arctic waters, and Baalsrud was the only one to escape the Nazi onslaught and, soaking wet and missing one shoe, he escaped up a ravine and shot and killed a Gestapo officer. He evaded capture for roughly two months, suffering from frostbite and snow blindness. He failed in his bid to reach the border of neutral Sweden and threw himself on the mercy of some Norwegian citizens who happened to have access to the Norwegian underground. While hiding in their barn, he amputated a significant number of his own frostbitten toes with an ordinary knife.

These citizens managed to move Baalsrud close to the Swedish border, but were forced to leave him in a snow cave for roughly two weeks before they returned and delivered him to a reindeer herder who finally took him over the frontier to safety.

He recuperated in a Swedish hospital for seven months, returned to England through South Africa, Asia, Australia, New Zealand and America before rejoining the fight.