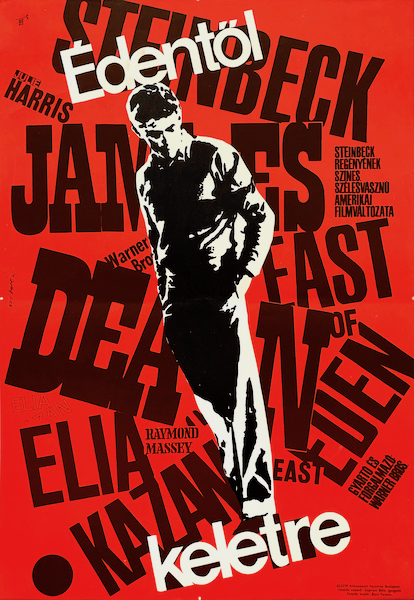 East of Eden is a 1965 vintage Hungarian movie poster designed by Andras Mate.

East of Eden is a 1955 American film, directed by Elia Kazan, and loosely based on the second half of the 1952 novel of the same name by John Steinbeck. It is about a wayward young man who, while seeking his own identity, vies for the affection of his deeply religious father against his favored brother, thus retelling the story of Cain and Abel.

The film stars Julie Harris, James Dean (in his first major screen role), and Raymond Massey. It also features Burl Ives, Richard Davalos, and Jo Van Fleet, and was adapted by Paul Osborn. Although set in early 20th century Monterey, California, much of the film was actually shot on location in Mendocino, California. Some scenes were filmed in the Salinas Valley.

Of the three films in which James Dean played the male lead, this is the only one to have been released during his lifetime and the only one Dean personally viewed in its entirety. The film, along with Dean's other films Rebel Without a Cause and Giant, has been named by the American Film Institute as one of the best 400 American films of all time. In 2016, the film was selected for preservation in the United States National Film Registry by the Library of Congress as being "culturally, historically, or aesthetically significant". (wikipedia.org)

A wilful young man contends against his brother for the attention of their religious father while reconnecting with his estranged mother and falling for his brother's girlfriend.