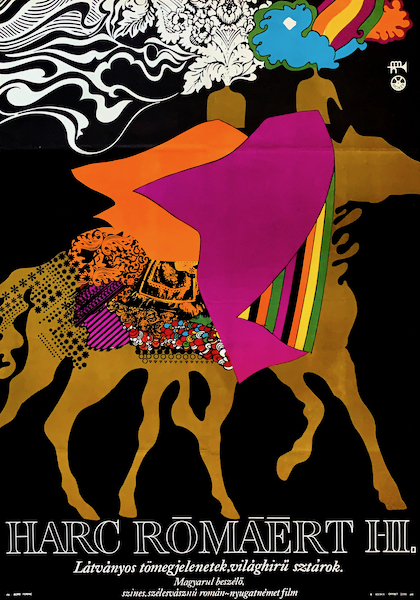 The Last Roman is a 1969 vintage Hungarian movie poster designed by Lajos Gorog.

Kampf um Rom (English language title: The Last Roman) is a West German-Italian historical drama film starring Laurence Harvey, Orson Welles, Sylva Koscina and Honor Blackman. It was produced by Artur Brauner and was the last film to be directed by Robert Siodmak. It was originally released in two parts (Kampf um Rom 1. Teil and Kampf um Rom 2. Teil: Der Verrat) in 1968 and 1969 as a late installment of the sword-and-sandal genre. Kampf um Rom shows the 6th-century power struggle between Byzantine emperor Justinian, the descendants of the Western Roman Empire and the Ostrogoths. The film is based on a novel by Felix Dahn. (source: wikipedia.org)

Cethegus, leader of the Roman nobility, travels to Bizantium and its leader Justinian, in an attempt to raise an army to march on the Goths under Narses. Cethegus would like to set the two sides to war against each other, that his own forces might take control at the outcome.