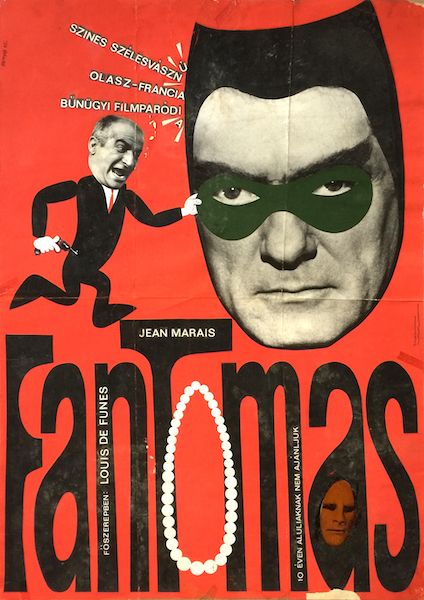 Fantomas is a 1964 French comedy film starring Jean Marais as the arch villain Fantomas opposite Louis de Funes as the earnest but outclassed commissaire Paul Juve. In the film Juve teams up with journalist Fandor, also played by Marais, trying to catch Fantomas but never quite succeeding. It was France's answer, in 1964, to the James Bond phenomenon that swept the world at around the same time. It is the first film of a trilogy, and Fantomas became extremely successful in Europe, the Soviet Union and Japan. It found success even in the United States, where fan websites exist to this day. Mylene Demongeot plays "Helene Gurn", the girlfriend of "Jerome Fandor", Fantomas' arch enemy. The general tone of the films is more light-hearted than the original Fantomas novels. Commissaire Juve, as played by Louis de Funes, becomes a comedic character, much unlike his literary counterpart. (source: wikipedia.org)