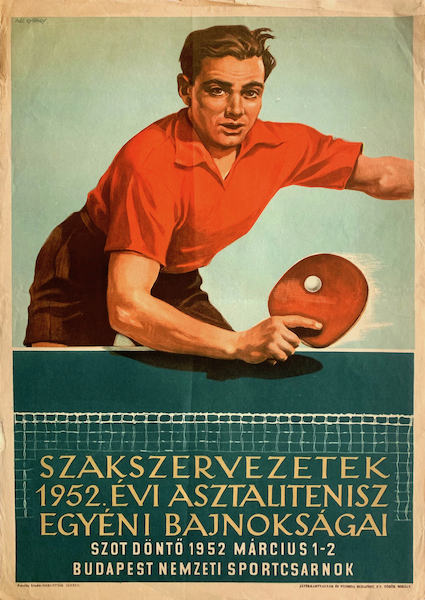 Table Tennis Championships of the Labor Unions in 1952

Beautiful socialist realist sport poster from the early 1950s, by a frequently commissioned poster artist of the era, Gyorgy Pal.

Pal designed several propaganda posters during the 1950s which followed the strict socialist realist manner. Among other works, he created several advertisements of the new holidays of the new regime and designed posters for the election campaigns of the ruling political party of the time. His favourite topics were agriculture and sport, though.

This poster was created for the Table Tennis Championships of the Labor Unions in 1952. It depicts a working-class men in a red shirt, playing table tennis. He is captured to be standing in front of a light green background, behind the green sports table, hitting the little white ball, while looking at the viewer. The text appears above, under the table tennis net, in yellow. The composition is simple and the colours are greyish - the message is more important than the image.

Sports life was considered to be an important issue by the socialist regime. Sports were connected to health, and the aim of the regime was to obtain healthy and strong workers who can produce well at work. What's more, they also get rid of the redundant energy they would spend on thinking and talking about political affairs. So sports life became strictly ruled and organised by movements, institutions and organisations led by the political party.

This poster is a good example of propaganda. It meets the requirements of Socialist Realism by the realist portrayal employed and the socialist content visualised.
The male figure is really characteristic of the period. Working-class men figures could appear on socialist realist posters as leading heros, representing the whole social class, or as everyday workers, representing common men as responsible and useful members of the society. Both representations served to show good examples and role models to follow. The working-class man visible in this poster is a doubly positive figure: first, he is a member of a labour union, so he appears to be responsible and useful worker, and second, he is also doing sports, so he must be a healthy and strong worker. Therefore, he displays the perfect socialist behaviour and embodies the ideal socialist man, accourding to the propaganda.

This piece is a typical socialist realist sports and propaganda poster from the early years of the 1950s.