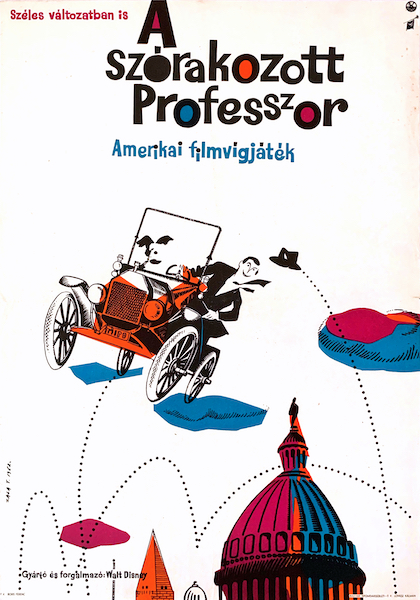 The Absent-Minded Professor is a 1962 vintage Hungarian movie poster designed by Tibor Zala.

The Absent-Minded Professor is a 1961 American science fiction comedy film produced by Walt Disney Productions and based on the short story "A Situation of Gravity" by Samuel W. Taylor, originally published in the May 22, 1943 issue of Liberty magazine. The title character was based in part on Hubert Alyea, a professor emeritus of chemistry at Princeton University, who was known as "Dr. Boom" for his explosive demonstrations. Directed by Robert Stevenson, the film stars Fred MacMurray as Professor Ned Brainard, alongside Nancy Olson, Keenan Wynn, Tommy Kirk, Leon Ames, Elliott Reid, and Edward Andrews. The plot follows Brainard as he invents a substance that defies gravity, which he later exploits through various means.

Released on March 16, 1961, the film was a huge success at the box office, and two years later became the first Disney film to have a sequel, Son of Flubber (1963). It was one of the first Disney films to be colorized (for the 1986 video release), and, along with The Shaggy Dog (1959) and Son of Flubber, is one of Disney's few black-and-white films to be produced after 1941. A remake entitled Flubber with Robin Williams was released in 1997. (source: wikipedia.org)