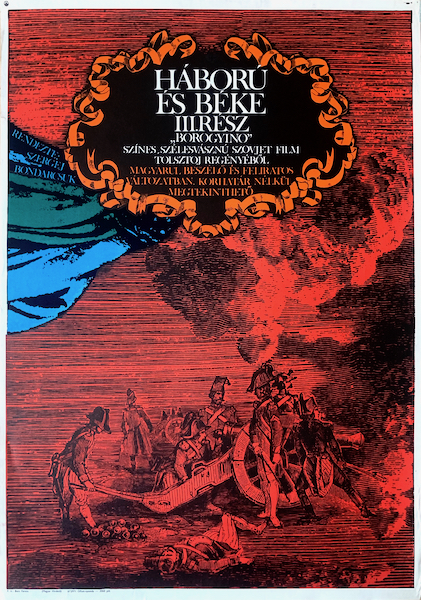 War and Peace (Russian: Война и мир, trans. Voyna i mir) is a 1966–67 Soviet war drama film co-written and directed by Sergei Bondarchuk and a film adaptation of Leo Tolstoy's 1869 novel War and Peace. The film, released in four installments throughout 1966 and 1967, starred Bondarchuk in the leading role of Pierre Bezukhov, alongside Vyacheslav Tikhonov and Ludmila Savelyeva, who depicted Prince Andrei Bolkonsky and Natasha Rostova.

The film was produced by the Mosfilm studios between 1961 and 1967, with considerable support from the Soviet authorities and the Red Army which provided hundreds of horses and over ten thousand soldiers as extras. At a cost of 8.29 million Soviet rubles – equal to US$9.21 million at 1967 rates, or $50–60 million in 2019, accounting for ruble inflation – it was the most expensive film made in the Soviet Union. Upon its release, it became a success with audiences, selling approximately 135 million tickets in the USSR. War and Peace also won the Grand Prix in the Moscow International Film Festival, the Golden Globe Award for Best Foreign Language Film and the Academy Award for Best Foreign Language Film. Since its release, the film is often considered to be the grandest epic film ever made, with many asserting its monumental production as unrepeatable and unique in film history. (source: wikipedia.org)