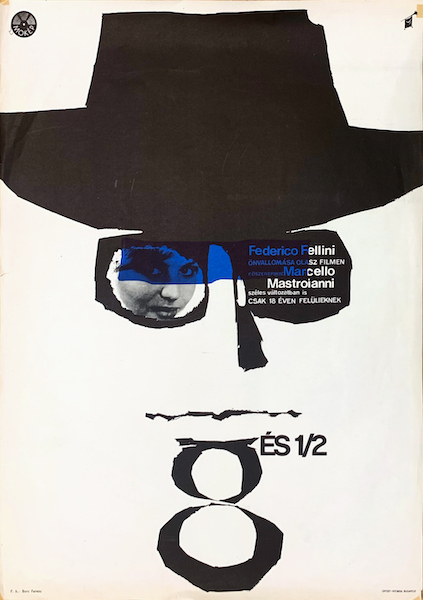 8 1/2 is a 1964 vintage Hungarian movie poster designed by Lajos Gorog.

It is shot in black and white by cinematographer Gianni Di Venanzo and features a soundtrack by Nino Rota, with costume and set designs by Piero Gherardi. 8+1⁄2 won the Academy Award for Best Foreign Language Film and Best Costume Design (black-and-white). It is also acknowledged as an avant-garde film and a highly influential classic. It was ranked 10th on the British Film Institute's The Sight & Sound Greatest Films of All Time 2012 critics' poll and 4th by directors. It is listed on the Vatican's compilation of the 45 best films made before 1995, the 100th anniversary of cinema. The film ranked 7th in BBC's 2018 list of The 100 greatest foreign language films voted by 209 film critics from 43 countries around the world. It is now considered to be one of the greatest and most influential films of all time. (source: wikipedia.org)