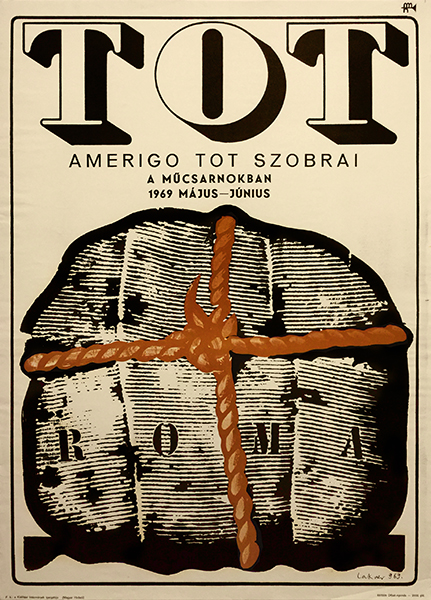 Amerigo Tot's sculptures at the Kunsthalle

Amerigo Tot (1909 – 1984) was a Hungarian sculptor and occasional actor. He was born in Fehérvárcsurgó, Austria-Hungary and moved to Rome, where he lived for the rest of his life. He studied in Budapest under Ferenc Helbing and György Leszkovszky from 1926 until 1928, and at the Bauhaus in Germany. As the Nazis came to power he moved to Rome and worked sculpting memorials on a stipend from the Roman Hungarian Academy, where he eventually became an adviser. He fought in the Italian resistance movement starting in 1943. He first received international recognition for his work on the frieze in Roma Termini station. He began doing abstract works in the 1950s. He returned home to Hungary several times, including 1937, 1939 and in 1969 which was a long prepared step from the side of the Hungarian communist culture-buro. At home he was a highly celebrated "world famous" artist. He had big exhibitions. He did traditional works, including a Madonna sculpture in his hometown, and very famous abstract sculptures, public monuments too, like Microcosm in Macrocosm (a tribute to Béla Bartók), His Majesty, the Kilowatt in Kecskemét. The Amerigo Tot Museum in Budapest is named after him. In the 1960s and 1970s he made occasional appearances in films. He is perhaps best known to English-speaking audiences for his role as Bussetta, Michael Corleone's bodyguard and executioner of Johnny Ola in The Godfather Part II. According to George S. Larke-Walsh, Tot's character in the film had to be brutal so that Michael's authority was retained. He also appeared in The Most Beautiful Wife and Pulp (1972). The latter was directed by Mike Hodges for United Artists and featured Tot as Sotgio. Tot died in Rome in 1984 and was buried in Farkasréti Cemetery in Budapest. (source: wikipedia.org)