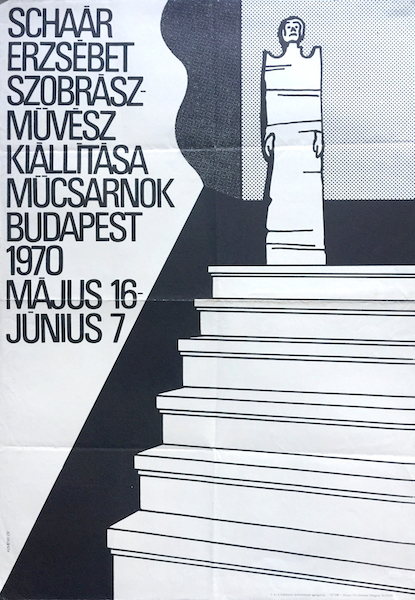 Black and White exhibition poster by the famous pop art artist György Kemény. In the late 1960s and early 1970s Kemény was designing extremely colorful pop art compositions for posters. He was one of the most important pop art painters and conceptual artists of the time in Hungary (besides the painters László Lakner and Gyula Konkoly, or the poster artist Árpád Darvas). His posters were often erotic and shockingly fresh in the late 1960s, and they usually had extremely vivid colors (yellow, orange, green and pink). In the year this poster was made (1970) he created another one for a folk art show in the Museum for Ethnography, which has a completely different style: it shows an intensive orange background with yellow and green drawn letters.

This parallel work of the artist raises the question why he decided to leave the colors. A probable answer is that he was unconsciously influenced by the art of Schaár, since she usually creates large scale white plaster sculptures. The melancholic, monochrome world of Schaár is overheard through the poster. Kemény's creed is to always make  something unusual, that's why he changed his style in about every ten years. After succeeding with pop art works, and having many followers, he turned to monochrome drawing in 1972. Until 1982 he was using only pencil drawing on his posters.

According to the artist the poster for the exhibition of Erzsébet Schaár represents a transition; leading to the next period. It also can be seen as an exception, or a special work inside the pop art period: the drawing follows the pop compositions, yet it lacks the vivid colors; but a huge area is filled with raster dots (made with lettraset), which is a typical pop art motive. It seems like the colors are here replaced with the intensive Black and White contrast. The poster is also a memory of a friendship between the two artists. This exhibition in the Art Gallery of Budapest was organised by Kemény's wife at the time, the art historian Krisztina Jerger. Erzsébet Schaár liked the poster of Kemény so much, that it was hanged in her atelier for decades.