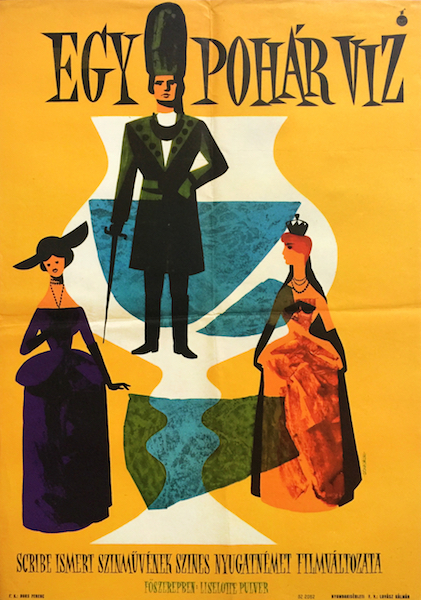 Glass of Water, A

A Glass of Water is a 1963 vintage Hungarian movie poster designed by Imre Somorjai.

A Glass of Water (German: Das Glas Wasser) is a 1960 West German comedy-musical film directed by Helmut Käutner. It was entered into the 10th Berlin International Film Festival. It is an adaptation of the 1842 French play Le Verre d'eau by Eugène Scribe and is set in London in 1710 during the War of the Spanish Succession.

Still young and inexperienced, Queen Anne of Great Britain is a weak puppet-queen under the influence of Sarah Churchill, whose intrigues are an attempt to paint her warlike husband the Duke of Marlborough in a better light. However, Henry St. John, a noble journalist and leader of the opposition, is also trying to influence the queen - he wants to end the war with France as soon as possible and by any means necessary.

Sarah is not averse to romantic adventures and so becomes the patron of the young country lord Arthur Masham, unceremoniously making him an ensign in the queen's guards. However, Henry St. John sees through the plan, knowing that Masham is engaged to Abigail, a jealous shop assistant in a jewellery store, who he wants to win for himself. Masham kills a very rich cousin of Henry in a duel. Henry thus inherits a huge fortune and the title Lord Bolingbroke. He wins the next round of intrigues, getting a position in the queen's court for Abigail and thus gaining influence there for himself.

Via Abigail he learns that the queen has her eye on Masham without him being aware of it. As a signal for a planned rendezvous, she wants to pass him a glass of water during a ball. Henry thus explains to Sarah that she has a rival, but does not name names. However, at the queen's next ball she vies with the queen for Masham's favour and then panics, meaning both she and Masham have to resign their roles as the queen's confidantes.

Even so, the tide seems to be turning in Sarah's favour when she and a few other ladies surprise the queen during a night-time meeting with Masham. However, Henry is ready - he arrives immediately and saves the queen with a white lie. He thus becomes her sole advisor and Sarah's fate is sealed - she is banished from court and Marlborough is dismissed - leaving Henry as prime minister at the head of a new cabinet, whose first task will be to resume peace negotiations with France.