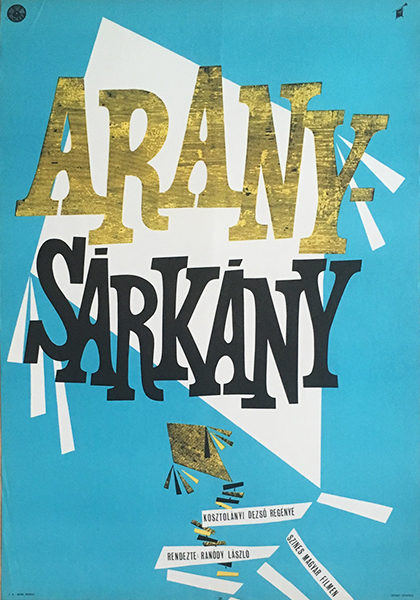 Poster of the Hungarian movie, the Golden Kite based on the novel published in 1925 of the well-known Hungarian writer, Dezső Kosztolányi. It is about Antal Novák, who's living in Sárszeg with his daughter Hilda. He teaches mathematics and physics at the local high school. He is struggling with his students who are  about to graduate, especially with the worst pupil, Vili Leszner. Besides, his daughter is lying to him, she takes off with her lover. The various humiliations finally lead him to suicide. Kosztolányi's novel is a great depiction of the general atmosphere of Hungary in the 1920s.

De film poster's design was done by Crescencia Zelenak who often used cut out and montage techniques just as on this poster. The vivid blue background creates harmony with the golden, black and white details.