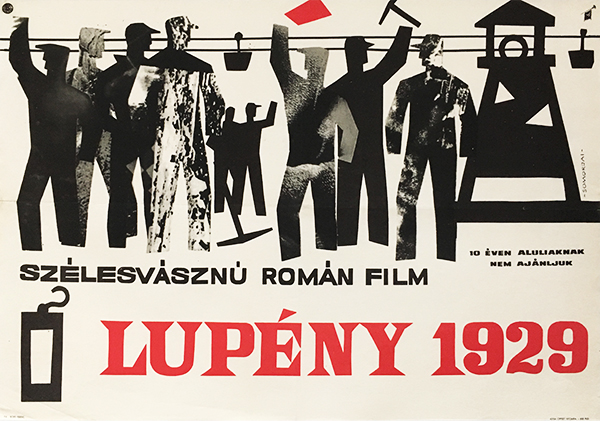 Romanian film about the miner uprising in 1929. The Lupeni strike of 1929 took place on 5 and 6 August 1929 in the mining town of Lupeni, in the Jiu Valley of Transylvania, Romania. Their demands included (in conformity with new legislation adopted under international pressure) an eight-hour workday, a 40% raise for those who worked at furnaces and in pits, the provision of food and boots, and an end to children working underground. The two sides could not reach an agreement. A trial ensued, and as the ruling of a court in Deva was not to the miners' liking, they appealed to the High Court of Cassation and Justice. (source: wikipedia.org)

The poster has a geometric design and employs paper cut-out technique. The figures represent miners and their tools, such as pikes or a lantern.