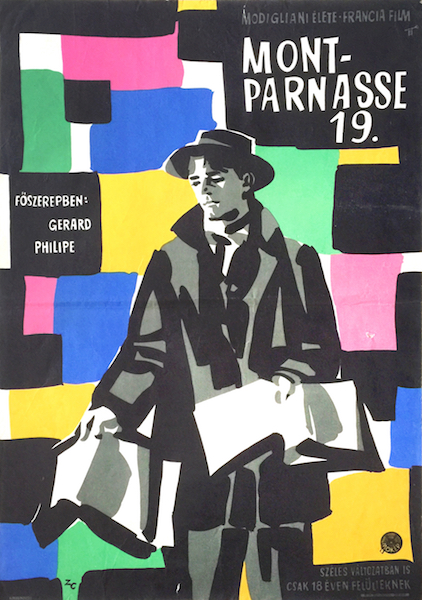 Montparnasse 19 (French: Les Amants de Montparnasse, lit. 'The Lovers of Montparnasse') is a 1958 French-Italian drama film based on but not literally chronicling the last years of the life of the Italian artist Amedeo Modigliani, who worked and died in abject poverty in the Montparnasse area of Paris. Some of his most famous paintings done then were of his last two lovers, Beatrice Hastings and Jeanne Hébuterne.

Leading a bohemian existence In Paris is the artist Modigliani, known as Modi. Spending much of his time drinking and sleeping with the attractive writer Beatrice, he does some drawing and painting but sells virtually nothing. He meets a beautiful young art student called Jeanne, who is locked up by her family to keep her away from him. His friends the Zborowskis do their best to keep him afloat, but his fragile health, weakened by constant alcohol and tobacco, gives out and he is sent to Nice to recuperate. Jeanne escapes and joins him there, after which the two are inseparable. Returning to Paris, the Zborowskis arrange a one-man show in the prestigious gallery of Madame Weill, where everybody turns up for free drinks at the opening but nobody buys. After complaints, the police order the removal of a nude from the window. A cynical dealer called Morel explains that Modi is sure to die soon and that is when people will pay for his works. The Zborowskis find an American millionnaire who is genuinely interested in some of Modi's canvasses (which would later become world-famous) but when he says he would then use the blue eyes of Jeanne to advertise his products, Modi walks out in disgust. Despondent at his inability to combine the quest for beauty in his paintings of Beatrice and Jeanne with any commercial reality, and with his health increasingly feeble, he goes round cafés trying without success to sell his drawings. Collapsing in the street, he is taken to hospital where he dies alone. Without telling her what has happened, Morel rushes round to a delighted Jeanne to buy up all unsold works for immediate cash.

Stéphane Audran as a girl (uncredited)