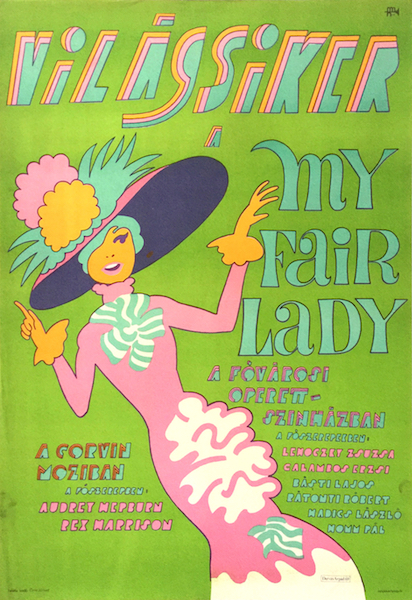 My Fair Lady is a 1969 Hungarian vintage Pop Art movie and theatre poster designed by Arpad Darvas. This Pop Art masterpiece advertises the movie and the theatre performance at the same time. This is a first release movie poster, and there is another poster which only advertises the film.

My Fair Lady is a 1964 musical film adaptation of the Lerner and Loewe stage musical of the same name, based on the 1938 film adaptation of the original stage play Pygmalion by George Bernard Shaw. Directed by George Cukor, the film depicts misogynistic and arrogant phonetics professor Henry Higgins as he wagers that he can take flower girl Eliza Doolittle (Audrey Hepburn) and turn her Cockney accent into a proper English one, thereby making her presentable in high society. The film won eight Academy Awards, including Best Picture, Best Actor, and Best Director. (source: wikipedia.org)