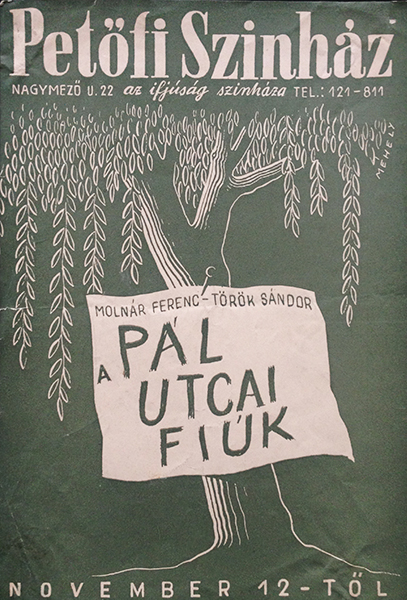 The Boys of Paul Street at Petofi Theatre

Tram poster promoting the theatrical premiere of the famous Hungarian novel, The Boys of Paul Street.

The Boys of Paul Street (Hungarian: A Pál utcai fiúk) is a youth novel by the Hungarian writer Ferenc Molnár, first published in 1906. The novel is about schoolboys in Józsefváros neighbourhood of Budapest and set in 1889. The Paul Street Boys spend their free time at the grund, an empty lot that they regard as their "Fatherland". The story has two main protagonists, János Boka (the honourable leader of the Paul Street Boys) and Ernő Nemecsek (the smallest member of the group). When the "Redshirts"—another gang of boys, let by Feri Áts, who gather at the nearby botanical gardens—attempt to take over the grund, the Paul Street Boys are forced to defend themselves in military fashion. Although the Paul Street Boys win the war, and little Nemecsek repeatedly demonstrates that his bravery and loyalty surpasses his size, the book ends in tragedy. (source: wikipedia.org)