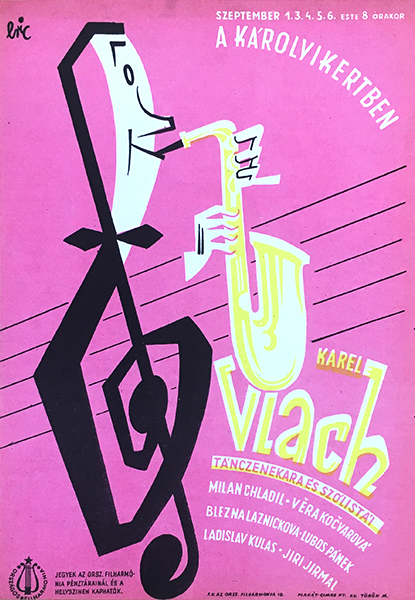 The artist Eric Vogel had been working as a poster artist from the 1930s but initially he was successful in stage and costume design. He  was a cheerful person and he was very popular among theater actors and actresses. He got many theater related commissions and he was a constant illustrator of the Theater Life journal. On his posters he mostly depicted cheerful characters such as clowns or comic figures and he applied vivid colours and simple drawings. Hi style is very characteristic, easy to recognize.

Karel Vlach 1911 - 1986) was a Czech dance orchestra conductor and arranger. He founded his first orchestra in 1938. Many important composers, instrumentalists and arrangers of the Czech jazz scene gradually went through his band. In 1947-48 Vlach's orchestra cooperated with the V+W Theatre (former Osvobozené divadlo). He recorded prolifically with Supraphon and his output includes both light classical and orchestral as well as jazz and pop arrangements for big band with strings. He also arranged and conducted many Czech film scores from 1940 to 1980. He launched the singing careers of Czech artists Yvetta Simonová (whom he married) and Milan Chladil in 1958. He and his musical colleagues Dalibor Brazda and Gustav Brom also arranged and recorded many titles for British singer Gery Scott in the late 1950s, mostly from what is now termed the American Songbook series. Many of these titles are now collectors items. (source: imdb.com)