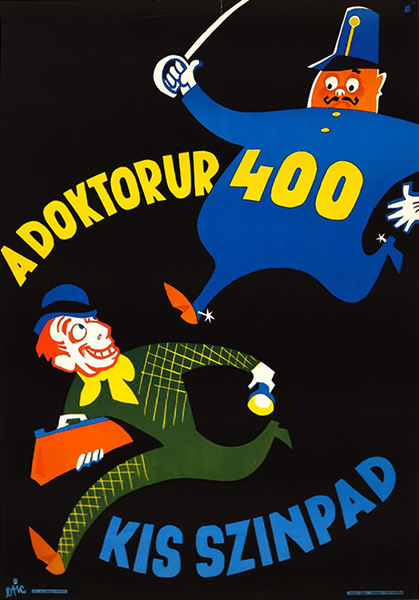 Poster for a theater play, the Doctor. It was designed by Eric Vogel, who was the costume designer of the play. Eric Vogel was a very interesting character. He graduated as a painter but he earned his living mostly from stage and costume designing. His posters always have a humorous attitude. He tends to depict moments of life or a certain play.

The Doctor was a play written by Ferenc Molnár, a Hungarian novelist and playwright, who died in New York. He was a very talented artist whose plays are still among the most popular ones played in theatres. The Doctor is Ferenc Molnár's very first theatre play which pemiered in 1902. Although the play was written more than a century ago, it carries values still relevant today. It is about people trying to find themselves and doing everything without any moral concerns in orderv to reach their goal. The play is still on stage both in Hungary and abroad

The poster bears the characteristics of the unmistakable style of Eric Vogel: vivid  colours, humorous characters, dynamic composition. The image shows a scene from the play, when the policeman tries to catch the thief. The black background gives a great emphasis to the blue, yellow and green colours. A lovely composition.