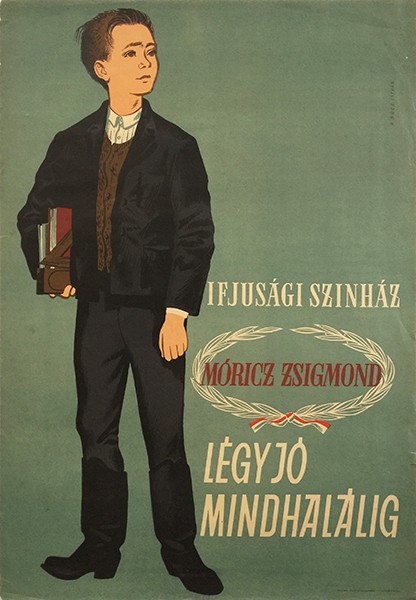 Be Faithful Unto Death

Poster for a youth theatre play based on the classic novel of Zsigmond Móricz. The plot takes place in 1890 and centers around Misi Nyilas, a pupil, who gets a package from home. He does not open it immediately, instead he goes to uncle Póslakay as he promised to read him the news, then he goes and bets the numbers on lottery for the old man. In the meantime his schoolmates eat the food they found in Misi's package. He doesn't care, he only wants to read the letter by his mother. After that Misi gets a new job, he is working hard. He gets in trouble whe he realizes that the lottery numbers of his old friend were pulled but he lost the ticket.  Even though he acted always faithful and honest he becomes accused by people who know him. At the end the truth is revealed, but Misi's heart is broken by the disappointment he experienced.

The poster is simple, depicts the protagonist of the story.