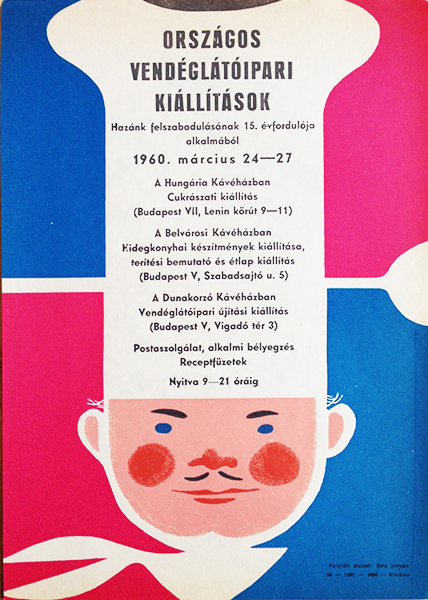 Poster for the National Catering Exhibition in 1960. According to the poster that year was the 15th anniversary of the liberation of the homeland. This so-called liberation of Hungary happened in 1945 when the Soviet army invaded the country and as by winning the second longest siege of the Second World War they took over the Nazis. During Socialism this event was called liberation because in 1944 the Germans occupied Hungary thus this liberation means that the Soviets liberated the Hungarians from the German occupation. Even if this happened indeed, it is more suitable to call it an occupation as Hungary was under a Soviet regime until 1989 which means they stayed in the country for 45 years after liberating it. Obviously during the regime it was obligatory to call it a liberation despite everyone knew that using this word in relation with the subject was not completely legitimate.

The poster advertises thzree different catering exhibitions taking place at three different café houses in Budapest. The composition is lovely. In the middle there is a chef with his large hat. the information is written on the hat.The page is divided into two by a wooden spoon placed horizintally.