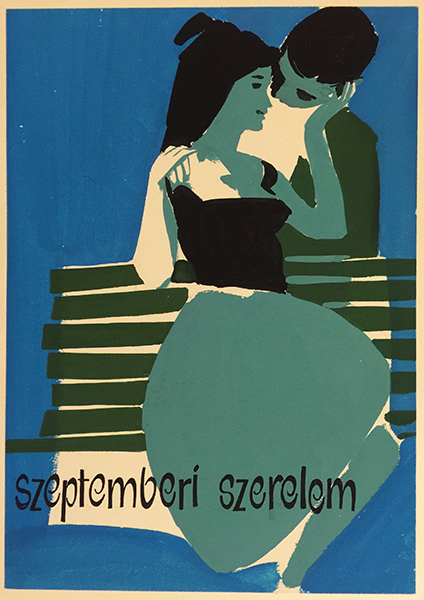 „September Love (German: Septemberliebe) is an East German film directed by Kurt Maetzig. It was released in 1961.

Leading chemist Hans Schramm is betrothed to Hanna, but falls in love with her younger sister Franka. The two attempt to repress their feelings, but eventually begin an affair. When Hans is extorted by a group of West German agents, who demand to know about his secret work, he is griped by panic and decides the only way out is to flee to the West. Franka discovers his plans and informs the Stasi. Hans perceives it as betrayal at first, but after all ends well, he realizes she only wanted the best for him.”
(source: en.wikipedia.org)

Antal Gunda was a fine graphic artist who created a plenty of posters. He designed several exhibition posters, numerous propaganda posters, a lot of theatre posters and a great number of movie posters. His movie posters has an expressive character, often using watercolor paint or paper cut technique. He liked using roughly torn paper pieces in the paper cut, in order to create an expressive composition. This poster is a fine example for that. It captures the main characters, the couple huddle together on a bench, using blues and greens and a strong contrast. The result is a concentrated, simple and elegant design.