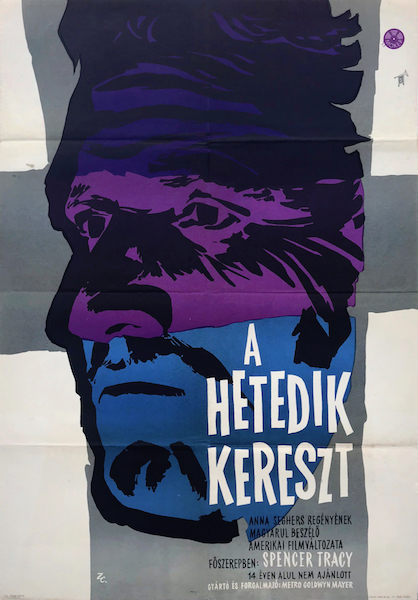 The Seventh Cross is a 1959 vintage Hungarian movie poster designed by Crescencia Zelenak.

The Seventh Cross is a 1944 drama film, set in Nazi Germany, starring Spencer Tracy as a prisoner who escaped from a concentration camp. The story chronicles how he interacts with ordinary Germans and sheds his cynical view of humanity.

The film co-starred Hume Cronyn, who was nominated for the Academy Award for Best Supporting Actor. It was the first film in which Cronyn appeared with his wife Jessica Tandy, and was among the first feature films directed by Fred Zinnemann.

The movie was adapted from the novel of the same name by the German refugee writer Anna Seghers. Produced in the midst of the Second World War, it was one of the few films of the era to deal with the existence of concentration camps.

The year is 1936. Seven prisoners escape from the fictitious Westhofen concentration camp near the Rhine. The escapees are: a writer, a circus performer, a schoolmaster, a farmer, a Jewish grocery clerk, George Heisler (Spencer Tracy) and his friend Wallau (Ray Collins).

The camp commandant erects a row of seven crosses and vows to "put a man on each." The first to be apprehended is Wallau, who dies without giving up any information. With the dead Wallau narrating, the film follows Heisler as he makes his way across the German countryside, steals a jacket to cover his prison garb, and watches as the Nazis round up other escaped prisoners, where they are returned to the camp and hung on crosses, suspended by their arms tied behind their backs. Through it all, the local population seems largely indifferent.

Heisler first makes his way to his home city of Mainz, where his former girl friend, Leni (Kaaren Verne), had promised to wait for him. But she has since married and refuses to help. He is given a suit of clothes by Mme. Marelli (Agnes Moorehead), and nearby one of his fellow escapees, the acrobat, leaps to his death to avoid being captured. With his options running out, Heisler goes to an old friend, Paul Roeder (Hume Cronyn). Though Roeder is a factory worker with a wife (Jessica Tandy), and young children, he still risks all to help Heisler. Roeder gets in touch with the German underground, whose members risk their lives to get Heisler out of the country. Through his exposure to this courage and kindness, and with the help toward the end of a sympathetic waitress (Signe Hasso), Heisler regains his faith in humanity. He escapes via boat to an unknown destination that he identifies as "probably Holland."