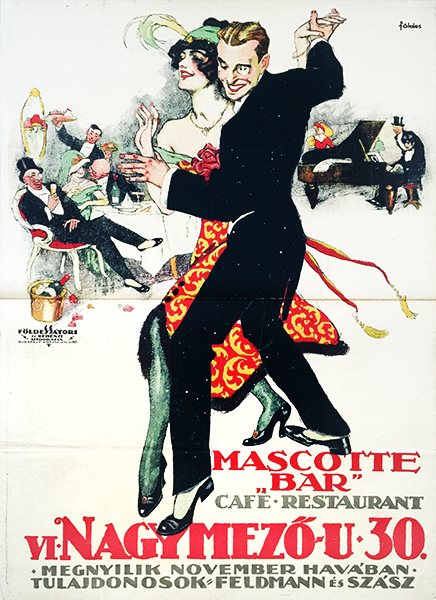 Impressive poster from 1919, designed by Imre Földes, a significant artist of the early poster design of Hungary.

'Mascotte Bar Café Restaurant. VI. Nagymező u. 30. opens in November. Owners: Feldmann and Szász' - the poster informs about the opening of a new café in an elegant and popular area of Budapest, Nagymező Street. The street is also called 'the little Broadway of Budapest' due to the fact that numerous theatres are located there, but it also has several bars, cafés and other important venues. It became popular before the turn of the century, and Mascotte Bar was a venue there in 1919 and 1920.

Specific figures of the era like ladies in elegant dresses and gentlemen in tail coats can be seen on the poster which depicts a typical nightlife scene from the first decades of the 20th century. A pair is depicted dancing in the front and others drinking and chatting in the background, along with a musician playing the piano. The main figures, a decorative and graceful female figure and an elegant gentleman, are typical characters of Földes. The clothing and hairstyle reflect the fashion trends of the period, the end of Art Nouveau and the start of Art Deco. The whole scene evokes the atmosphere of the social club of aristocrats and bourgeois. The firm lines, the detailed drawing and the decorative typography are characteristics of Art Nouveau, at the same time the drawing is more concentrated, the text is less and the appearing fashion has some new elements - the shorter dress for instance - which indicates a shift towards Art Deco. Both styles were favoured in applied arts during the first periods of the 20th century and were mostly enjoyed by the upper social classes as these styles symbolized elegance and wealth.

This fine, spectacular piece evokes the nightlife culture of Budapest in the pre-war period with its original bohemian atmosphere.