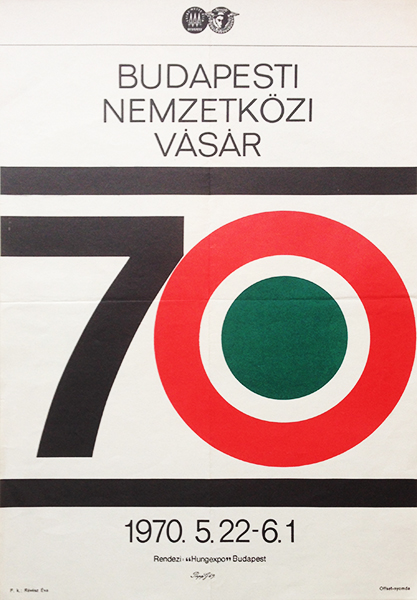 Gábor Papp created his famous design based on typographical elements for the Budapest International Fair 1970 (Budapesti Nemzetkozi Vasar 1970). The numbers 7 and 0 are perfectly synchronized with a harmonic typography. The 0 forms a Hungarian national symbol, the cockade, showing the national colors.

Gabor Papp was one of the most famous graphic designers in Hungary, who was influenced by the Swiss typographic design /International Typographic Style in the 1960s. The International Typographic Style, also known as the Swiss Style, is a graphic design style developed in Switzerland in the 1950s that emphasizes cleanliness, readability and objectivity. Hallmarks of the style are asymmetric layouts, use of a grid, sans-serif typefaces like Akzidenz Grotesk, and flush left, ragged right text.(source: wikipedia.org)