Gábor Papp was one of the most prominent graphic designers in the 1950s, 1960s and 1970s. He was highly regarded for his typographic posters, emblems and logo designs. Also, Papp was a great organiser of exhibitions as the leader of the seminal Papp-group - an artist's group formed by pupils and admirers of Gyorgy Konecsni -, which included a number of Hungary's most outstanding graphic artists of the era.

Papp graduated from the University of Fine Arts in 1940 under the supervision of Jenő Haranghy. After finishing his studies he started working on exhibition and fair designs with György Konecsni. His woonderful poster for the important 1948 poster exhibition in Budapest shows a strong influence of Konecsni's style, but it is also proof of Papp's outstanding talent. Multiple artist designed posters for this event, including Pál Gábor, László Káldor, Károly Reich, Károly Rohonyi, Tibor Zala, and Papp.

He played an essential role in the renaissance of the political poster between 1945 and 1948. During these years the communist party was emerging and working on gaining total power over Hungary. Papp designed leftist posters and advertisments for the government's  “Three-Year Plan” of 1947-1949. By 1949 the communist party reached its goal and established a one-party system. Like all artists, Papp also had to oblige to the superior power and follow the socialist realist style. His official propaganda works were mostly designed together with Károly Reich. The duo did not only work on political grounds but also designed picturesque landscapes for tourism posters to advertise Hungarian destinations.

By 1956 a general tension and resistance against the socialist manner that was trying to control people's freedom was evolving. An exhibition in this year was held in this spirit where unique and artistic designs were displayed as their declaration against the socialist realist style. As it could have been expected, most of these works have never been printed. Papp himself created compositions of the 1930s spiced with a hint of surrealism. The majority of Papp's works dealt with anti-war topics. Besides Konecsni, Pál Gábor put a great influence on Papp’s artistic vision, which can be recognized for example by the importance of typography on his posters and his approach to emblem design.

Papp's most significant artistic period started in the 1960s when politics started to loosen up as a result of the revolution of 1956. This easement took the pressure off of poster art what led to what we call today the golden age of Hungarian poster art. In this period, a large variety of styles and techniques had emerged. Papp chose the tradition of constructivism and began to design geometric and clear typographical posters and his compositions were defined by the harmonic proportions of geometric flat forms. Papp abandoned all characters, unnecessary details and objects, drawing inspiration from minimalism, hard-edge op art, and the geometric interior design of the time.

For Papp, the fields of applied graphics worked as a unity. His vision was to create a comprehensive design and image for a company, a corporate identity but it was yet too modern for Hungary in the 1960s. Papp did not only create posters but brochures, illustrations, flyers and all kinds of different advertisements.

Papp was extremely talented in designing emblems and logos which only consist of numbers, letters, basic geometric forms, and clear colours. He was the one who designed the image and logo of the Budapest International Fair (BNV). Papp was the author of the image and design of the Art World Week, creating its beautiful logo from just the letter ‘a’. Papp often worked for national festivals and anniversaries where he had a chance to use numbers and dates as basic visual elements.

His pure design and paper cut technique soon attracted many followers. His compositions are seemingly very simple, but they often carry extra or hidden meaning.

Once officials at the Institute of Foreign Affairs intended to publish a calendar and commissioned György Konecsni to contribute to it. Konecsni suggested 12 artists to each design an illustration for one month. This calendar is where the Papp-group started. The group organised several exhibitions in the 1960s and 1970s. Papp became the informal leader of the group. His vision was to assemble all the great graphic artists in order to attract attention to quality graphic design. Their exhibitions took place in the rooms of the Foreign Affairs Institute on Dorottya Street in Budapest, and each artist had a theme on which he could work with complete freedom. Papp assigned themes from the fields of applied graphics: stamp, press illustration, album cover, tourism, typography etc. The group had no unitary style; they were bounded only by the desire to produce quality design. (Members included: Balogh István, Darvas Árpád, Ernyei Sándor, Finta József, Görög Lajos, Hegedűs István, Heinzelmann Emma, Máté András, Papp Gábor, Sinka Mátyás, Szilvásy Nándor, Zelenák Crescencia.) In the 1970s, they took in members of the new generation, György Kemény and Károly Schmal, to show their works in exhibitions. These young artists were were very talented, however, they wer using different styles. 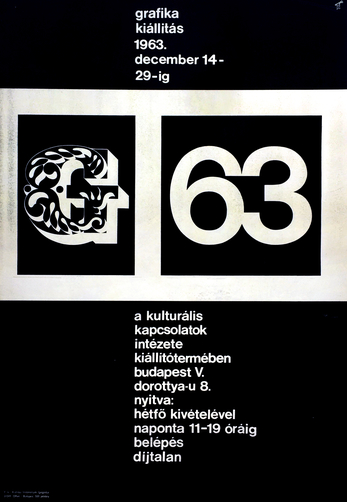