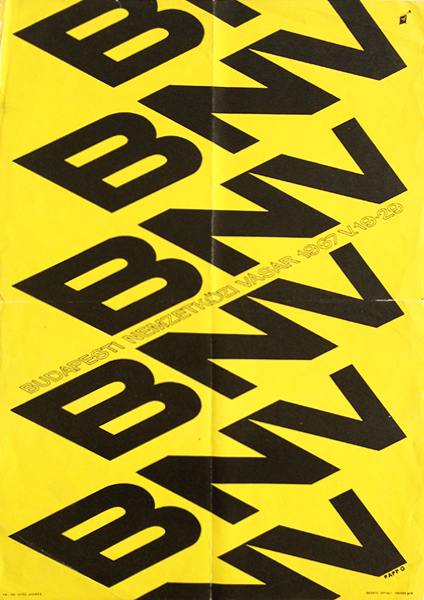 Very good, vertical and horizontal fold marks, tears along the fold marks, writing on the back with pencil

Gábor Papp was the official designer of the Budapest International Fair’s posters. Here are some of his other BNV posters: Budapest International Fair '66, Foire Internationale de Budapest 1968,  He used the abbreviation ‘BNV’ as a typographic element and used the contrast of the vivid yellow and black to achieve a strong impression. Papp was famous for creating mostly typographical designs. He was one of the most important graphic designers of his time, the leader of the Papp-group to which the most important graphic artists of the 1960s and 70s belonged. Papp's style is based on constructivism, he designed geometric and clear typographical posters and his compositions were defined by the harmonic proportions of geometric flat forms. Papp abandoned all characters, unnecessary details and objects, drawing inspiration from minimalism, hard-edge op art, and the geometric interior design of the time. This poster is a perfect example of the unique style of Papp.